Apple Watch: A Behind The Scenes Look And Interview With Tim Cook And Jony Ive [Video]

Although the company was quite clearly pushed for time, the iPhone 6 / Apple Watch parade on Tuesday seemed to pass without incident. As ever, it was a grand spectacle (unless you happened to be tuning in via Apple TV in certain areas), and after a lengthy period of preparation at the Flint Center in Cupertino, Apple managed to announce its key new products and features inside the usual two-hour limit. The Apple Watch was the real clincher – a product category that the Mac maker has never previously attempted – and if you enjoyed the original unveiling, you can now catch extended backstage coverage in a clip featuring interviews with CEO Tim Cook and design lead Jony Ive.

An interview with a high-ranking Apple executive is rare, but the folks at ABC were given an exclusive backstage pass that allowed them to hold one-to-one interviews with arguably the two most influential figures in the company. 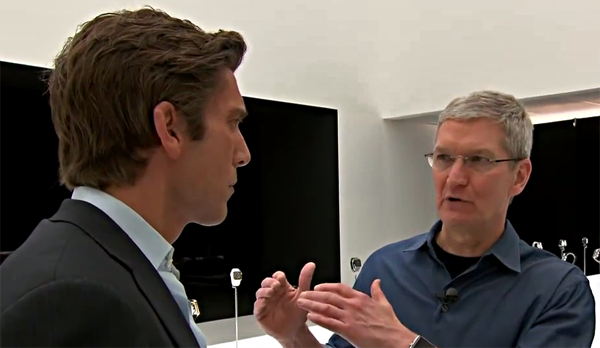 As well as talking about the Apple Watch itself, ABC News’ David Muir also took the opportunity to discuss the added significance of the keynote given that thirty years ago, Steve Jobs used the very same venue to announce the very first Mac to the world.

Cook said, when asked if he was thinking back to that iconic moment in 1984 when unveiling Apple Watch:

There’s not a day that goes by that I don’t think of him . . I think he would be incredibly proud to see the company that he left us . . . doing what it’s doing today.

The ABC News clip also catches a little time with Jony Ive, the guy credited with some of Apple’s most memorable designs prior to the Watch including, perhaps most notably, the MacBook Air.

Although the interviews don’t tell us much that we aren’t already aware of, it’s very interesting stuff, and given how infrequent it is to see Cook and Ive kick back and have a chat, it’s definitely worth the watch at seven minutes long.

With over 30 different varieties of Watch spanning three main configurations, consumers will have a tricky task picking which one they’re going to buy. Unlike with smartphones, wearing more than one watch at a once is not only impractical, but would simply look ridiculous.

Still, given that we’re a good few months from the “early 2015” release bracket, there’s plenty of time for decisions to be made, and if you’re considering the purchase, stay tuned to our continued coverage for new information as it arrives!