Apple has continued the progression of the extremely popular Siri universal search feature on the fourth-generation Apple TV by adding support for three new third-party apps available on the tvOS App Store.

The newly added support for MTV, VH1 and Comedy Central now means that Apple TV 4 owners can take advantage of Siri or the device’s Search app to instantly check for content to see if it is available on any of the newly added channels. They can then jump directly into that app/channel to view the media that was searched for if it is available.

For those with an Apple TV running tvOS who have never actually used Siri universal search, or those who just don’t own a fourth-generation Apple TV yet, Apple’s Siri universal search feature works by letting users conduct Siri voice or text-based searches to find movies and TV shows across a growing array of supported providers. If that content is available, the interface will then display the relevant apps and services that have access to it and can display it, allowing the user to dive straight into that specific app directly through the search mechanism.

When initially announced, Siri universal search only had support for a small number of apps and providers, meaning that deep-linked access to content was fairly limited.

In an effort to combat that, Apple has been slowly but surely adding support for new channels on a regular basis, meaning that Siri universal search as of today is now compatible with 36 different channels and providers in the United States.

Some of those supported channels include the aforementioned MTV, VH1 and Comedy Central, as well as the Travel Channel, SHOWTIME Anytime, PBS Kids, the Cooking Channel, HBO NOW and many more. Apple will of course be adding additional channels as time progresses but for now, a complete updated list of supported channels can be seen below. 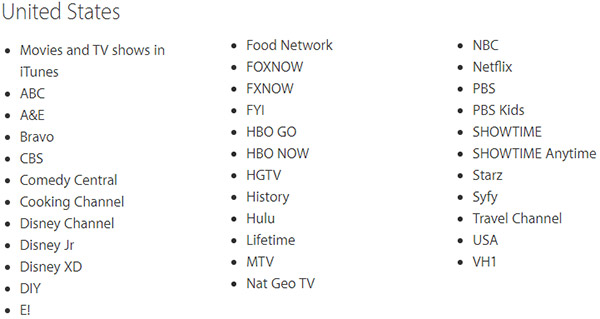 It may seem fairly trivial to a lot of users who use the Apple TV sparingly, but for those who rely on Apple’s set-top box as the main source of entertainment and provision of media in their living rooms, the Siri universal search feature is an integral part of that experience. Being able to view content and the channels it is available on in one simple search using voice or text commands, is extremely satisfying and efficient.