The fourth-generation Apple TV has managed to prove itself as an extremely capable market leading streaming set-top box in the relatively short period of time that it has been around. There are a number of features embedded within that ultimately appeal to those looking for a streaming set-top box of this nature, with universal search being one of them. It essentially affords users with the luxury of performing a single search across multiple services and channels with the aim of accessing content quickly and efficiently. In an effort to improve the feature, Apple has now extended universal search, including Siri, to support three additional apps.

Until this change, universal search was able to index and access listings from Netflix, Hulu, iTunes, PBS, PBS Kids, Showtime Anytime, Showtime, HBO Go, and HBO Now. Of course, it’s also worth pointing out that the ability to access those services is limited to those Apple TV 4 owners residing in the United States. Apple has now extended the functionality within the Apple TV 4 to support universal search across Nat Geo TV, Fox Now, and FXNow. Once again, that extension of service is limited to those with an Apple TV in the United States where these particular channels are available.

Those who reside outside of the United States still have access to universal search as a feature, but are limited to what can be displayed via specific channels and services. As an example, residents of the United Kingdom, Australia, Canada, France, and Germany are able to search TV shows and movies universally from Apple’s iTunes Store and Netflix. Countries that don’t fall into any of those regions are really only able to search for content on a universal level from content hosted via Apple’s own iTunes platform. It’s likely that this will grow accordingly as time goes on and the platform and service matures, but for now it’s clear that residents of the United States get the better deal. 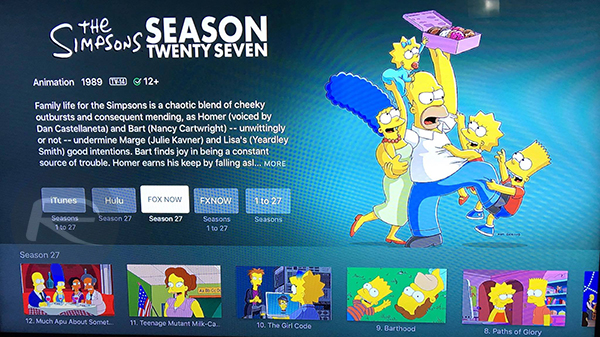 In an effort to provide additional clarity, Apple has created a dedicated support page that discusses universal search in greater depth. It also lists the sources that can be searched via the dedicated Search app on the Apple TV or by using voice as part of the Siri Remote functionality.