Apple TV Gets Notifications Ahead Of Alleged Hardware Refresh

Apple TV, as has been demonstrated over the past year through various software updates and the introduction of multiple new streaming channels, is much more to its Cupertino-based maker than a “hobby” – a word that Tim Cook used to describe the little black box back when he was COO. But while new content partners, from Red Bull to Crackle, have been aplenty, the set-top’s software hasn’t really been improved for a couple of years, and one of the key features it lacks at the moment is notifications. This may be all about to change, though, and with Apple TV users having been notified of certain artists performing live shows at this week’s iTunes Festival, we may just have our first glimpse of Apple TV notifications.

Even though Apple has built up a solid reputation for providing smooth, easy-to-operate software for all of its products, notifications are still a work in progress. We had to wait right the way until iOS 5 for the Notification Center to manifest itself, and according to recent reports, the fruit company has some refinements still to make looking ahead to iOS 8.

But while, on the mobile flavor of iOS, work is being done to fine tune a feature that has established itself over the past few years, Apple TV users would just be grateful for any kind of notification system, and as was the case in the early days of the iPhone, iPad and iPod touch, Apple TV notifications seem to pop up mid-screen rather than a more practical, unobtrusive notification banner.

During the iTunes Festival, Apple TV users were greeted with notifications interrupting currently viewed content, as reported by 9to5Mac, displaying a message that asked whether they’d like to switch to a live performance at the festival held in Texas, and while, further down the line, we’d expect notifications to be tucked away in a corner akin to the way things work on iOS and indeed OS X, it’s definitely a start.

What we would expect, if Apple did roll this notification feature out more broadly, is that it would allow the user to control which apps could push such pop-ups to the main screen. With certain iOS apps, particularly those that involve music or video (TuneIn Radio, Spotify et al), the user is often notified when a new artist releases an album or a particular, favorited radio show is being broadcast, and one suspects that this is the kind of thing that Apple is aiming towards for Apple TV. 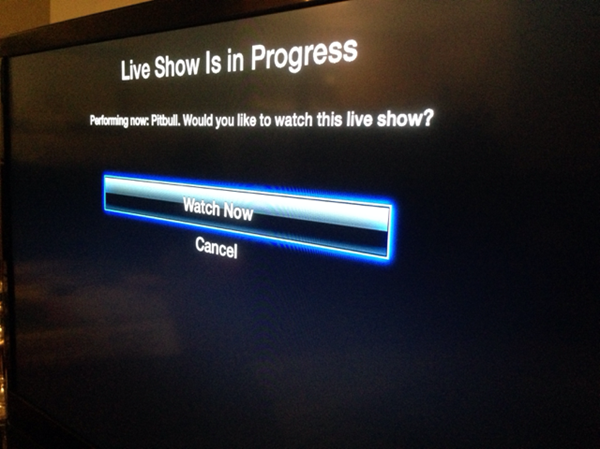 There have even been reports that Apple’s set-top box could be due a hardware upgrade in the near future, and with the device now being treated in a notably higher regard, this is certainly a distinct possibility.

As ever, we’ll keep you informed on any interesting tidbits related to Apple TV, so stay tuned!