Apple has once again managed to collect the top spot in Fortune’s list of the “World’s Most Admired Companies”. The world’s most valuable company has now won this award for nine consecutive years. Also, for only the fourth time, the list itself is topped by a trio of technology companies that have been in existence for forty years or less, with Apple once again setting the bar and leading the way when it comes to public perception of the brand.

Tim Cook’s Cupertino-based company is joined at the top of the roster by the other two companies in the AAA leadership race; Alphabet and Amazon in second and third place respectively in this particular list.

The top five is completed with an appearance by Berkshire Hathaway and Walt Disney, the world famous entertainment company responsible for some of the most iconic movies and cartoon characters of our generation.

There’s a new AAA standard in corporate America: the one-two three punch of Apple, Alphabet, and Amazon. For the fourth time, our list of the World’s Most Admired Companies Top 50 All-Stars is led by a trio of tech giants under 40 years old. They preside over a class of blue chips and even younger tech stalwarts, such as Facebook (No. 14), Salesforce (No. 34), and Netflix, which makes a return to the Top 50 at an impressive No. 19. 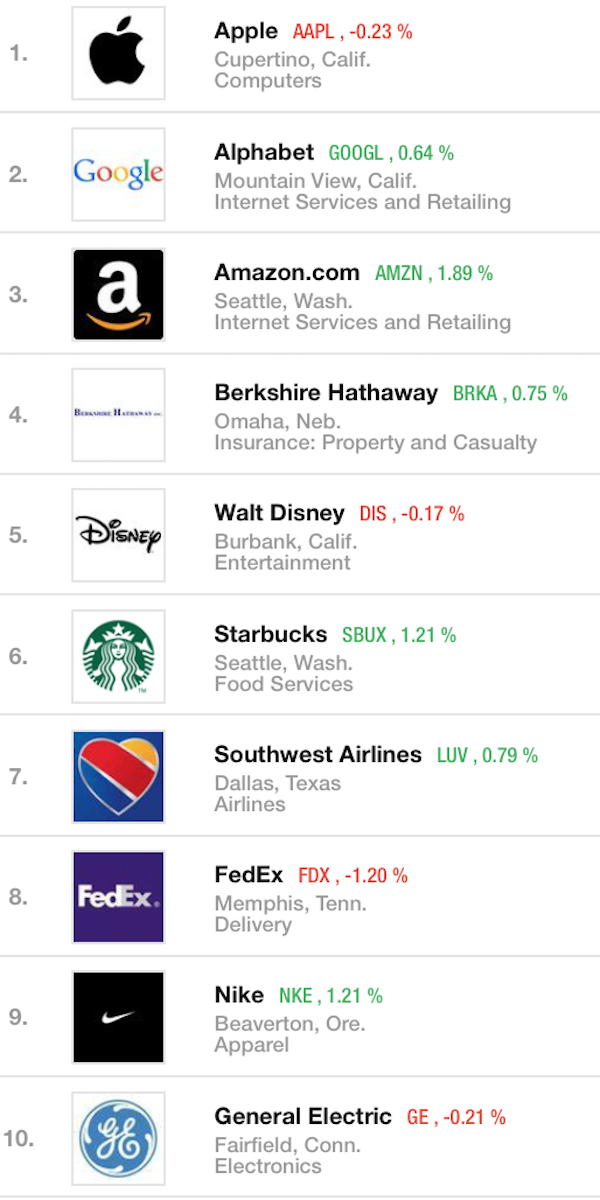 The full list of top 50 was ultimately whittled down from a list of 1000 US-based companies, along with 500 non-US companies with revenue exceeding $10 billion, all vying to be recognized as the world’s most admired corporation. Fortune’s survey partners – Korn Ferry Hay Group – then went through a process of interviewing executives, directors, and analysts to individually rate the companies within their own industry based on nine criteria sets. Things like investment, value, and social responsibility were all taken into account when ordering the companies in this final list.

Apple’s final rating of 8.6 was just enough to push Alphabet – Google’s parent company – into second place with a score of 8.2. Interestingly, what Apple will likely take great pride in is that for the first time the company actually finished in first place in all nine ranking criteria sets. It’s also actually very interesting to see a company like VISA, who you wouldn’t normally assume would be “admired”, make a first appearance on the list at number 47.