It’s no secret that Apple has some of the most profitable retail space on the planet when you look at its operations from a revenue per square foot perspective. With that in mind, it’s difficult to imagine what the Cupertino-based company could do to actually improve that retail experience for customers.

As part of the progression of that side of the business, it looks like the company is attempting to make its retail operations appear more mature and grown up by removing the ‘Store’ moniker in reference to its physical retail locations. Previously, when referring its physical retail outlets, Apple would refer to a particular location as an Apple Store. As an example, the company’s website would display The Grove Drive outlet in Los Angeles as “Apple Store, The Grove”.

The official company website has now been updated to reflect the new naming convention change, simply referring to the aforementioned outlet as “Apple The Grove”. The same change can be seen in all other stores, such as “Apple Store, Fifth Avenue”, now known as “Apple Fifth Avenue”. It looks as though this naming strategy has been on the cards for quite a while, at least internally and for newer stores.

With newer stores, such as the new San Francisco outlet in Union Square, Apple has always referenced that retail location simply as “Apple Union Square”. It makes perfect sense for the company to try and keep one flowing naming convention through the business, meaning that if new outlets were going to drop the “Store” moniker, then all existing physical locations would need to follow the same pattern.

Apple has previously used an internal memo service to inform employees that the change was coming, confirming that new retail stores would be dropping the ‘Store’ in name, with older physical locations to follow. The move appears to be more than just about showing a more mature side to the business, but to also try and position the locations as more than simply retail space for purchasing products. 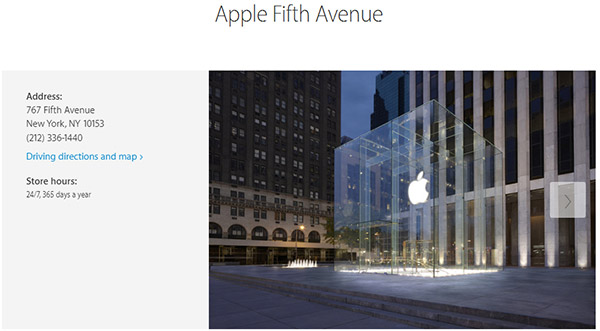 Apple’s new Union Square location offers regular live acoustic music performances along with a stunning 6K video wall and an outdoor plaza. It seems that Apple potentially wants to position its physical locations as places for social gatherings and events, as well as shopping.