The battle for supremacy in the smartphone arena continues to rage, and with this week’s Mobile World Congress, we’ve seen a number of high-profile announcements from some of the major players in the industry. Among them is Samsung, which has announced the Galaxy S6 and S6 Edge as it looks to recover from a torrid 2014, and we’re just now learning that amid the poor sales general and lack of enthusiasm towards the many smartphones that Sammy launched last year, bitter rival Apple also overtook it as the world’s foremost smartphone manufacturer in the final quarter.

The figures curated by research firm Gartner show that Apple narrowly bested its rival in terms of overall, worldwide smartphone sales in Q4 of last year, shifting 74.8 million units compared with Samsung’s 73 million. The gap isn’t particularly wide, nor insurmountable as the Korean outfit prepares to unleash the duo of new Galaxy models, but it is the first time that Samsung has been piped to the summit by Apple since 2011.

Throughout last year, it was quite apparent that Apple would be rolling out at least one larger smartphone to compete with other so-called “phablet” handsets, and as it transpired, we got two. As per the predictions of analysts, consumers have snapped up the iPhone 6 and iPhone 6 Plus in record numbers, many of whom might otherwise have opted for a Galaxy S5 / S6 or the Galaxy Note 4, and this has thus put quite a bit of pressure on Samsung. 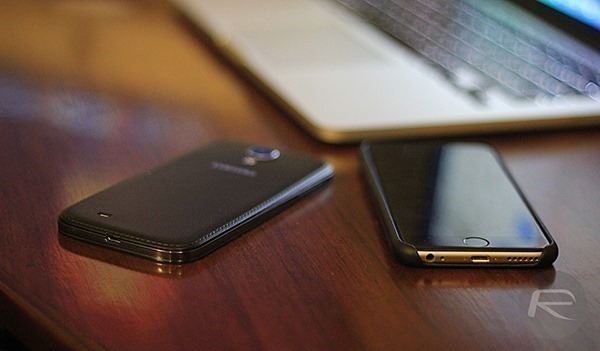 The figures are so close, that everything’s finally poised as we look ahead to this year’s scrap for dominance. Given that Samsung will be first to the draw with its latest entries, we’d expect the Tizen maker to return atop the pile in the near future, although when September comes around, there’s a reasonable chance that the next-gen iPhone could thrust Apple to the number one spot in the fourth quarter.

Despite the slump towards the end of 2014, Samsung still took the crown for most units sold worldwide, with some 307.6 million estimated handsets accounting for one-quarter of the overall market. This is in stark contrast to Apple, which only managed 191.4 million iPhones sold during the year, but considering the Cupertino’s limited variety compared with Samsung, the Cupertino company’s 15 percent market share is still very impressive.