Turning digital pages? There’s a patent for that! And guess what – Apple has it. While all tech companies must keep the patents rolling through in order to protect intellectual properties, it’s fair to say the Cupertino company has a bit of a reputation for being a tad over-zealous when it comes to sending sketches over to the USPTO. The latest, a design patent, concerns the turning over of fake pages.

Patent D670,713 is entitled "Display screen or portion thereof with animated graphical user interface," and has just been approved by the United States Patents and Trademarks Office this week.

As with most patents nowadays, it’s rather vague, and as you can see from the three figures in the drawing, covers a sequence of animations as a page is turned over, akin to that of a real book. The patent is drawn in an obvious manner, but does not mention exactly what the patent applies to. The broad nature and lack of explaining means it may not just refer to the page-turning in an eBook, but to other things, yet there is no real telling from the patent itself.

From what we can decipher, this design patent would not stop other e-readers from providing a page-turning functionality, but it would prevent them from simulating that book-esque look – at least in the manner Apple has presented it. However, there is nothing in the patent to suggest the pages couldn’t be turned a slightly different way, from another angle such as the top corner, and it would seem surprising that Apple hasn’t covered this as well. 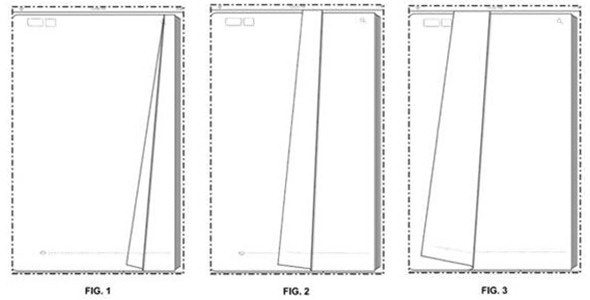 I know I cannot be the only book reader to grab the top corner as opposed to the bottom, and although this could be detailed in a further patent we don’t yet know about, the ever-organized Apple would probably have just included it with this one. A rival could very easily exploit the gaps left on this design patent, and considering the manner in which the big tech companies seem to be stockpiling patents as if it were some sort of arms race, don’t be surprised to see someone like Google pounce on these oversights.