Apple has joined the many public tributes to Muhammad Ali by updating its Apple.com homepage with a full-screen black-and-white photograph of the legendary boxer with an accompanying epitaph. The image of the iconic sports hero, who sadly passed away on Friday at the age of 74, dominates the front page of its website without any links to additional content.

It has taken Apple a number of days to update the consumer-facing Apple.com website with this beautiful tribute to one of the world’s most recognized sporting heroes. The memorial also carries the quote “The man who has no imagination has wings”, while the photo of Ali punching right into the screen instantly makes an impact. 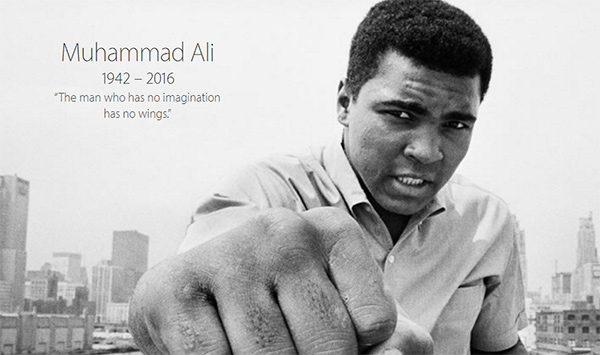 With that said, high-ranking executives within the Apple organizational structure, namely CEO Tim Cook and head of worldwide marketing Phil Schiller, have both posted their own personal tributes to the boxer via social media on Friday when the sad news started to filter across the globe.

This isn’t the first time that Apple as a company has chosen to feature this particular image of Muhammad Ali. The current Apple.com image of Ali, which shows the boxer in a loose-fitting shirt looking relaxed with his first outstretched in one of is familiar boxing poses, appears to be a direct reference to the “Think Different” advertising campaign that aired nineteen years ago in 1997. As part of that campaign, Ali appeared alongside other influential and highly respected individuals like Albert Einstein and the leader of the Indian independence movement, Mahatma Gandhi.

As a professional sportsman, Muhammad Ali is widely considered to be one of the most respected and celebrated sporting figures of our time. From a sporting perspective, Ali remains the only three-time lineal world heavyweight champion after securing world titles in 1964, 1974 and 1978. He was also as famous for his work, beliefs and appearances outside of the boxing ring as he was for the work he actually did in it. He was widely regarded as a man who inspired those around him, but was also seen to be extremely controversial for his views and comments on religion and racial politics.

During his life, Ali is noted for saying “he who is not courageous enough to take risks will accomplish nothing in life”, a sentiment that was enclosed on Friday by Tim Cook via Twitter. Muhammad Ali dared to take risks. He dared to break down boundaries, and he dared to put everything on the line for his beliefs. We join Apple in paying tribute to one of our sporting greats who has sadly been taken away.