If you’re even a casual follower of all things Apple these days, then you will no doubt be acutely aware of an issue, perceived or otherwise, relating to the current MacBooks and their fancy butterfly mechanism.

Released by Apple in new notebooks from 2015 onward and supposedly up to four times more stable than the scissor mechanism it replaced, the new butterfly keyboard has since become almost infamous. Many, many people have had to have keyboards or entire computers replaced due to their failure rate, often simply down to a simple problem – dust under the keys.

Now, it seems Apple is being forced to at least acknowledge that there may be truth to a newly lodged complaint in the Northern District Court of California claiming that “thousands” of MacBook and MacBook Pro notebooks produced in 2015 and 2016 have experienced keyboard failures.

Furthermore, the complaint claims that Apple “continues to fail to disclose to consumers that the MacBook is defective, including when consumers bring their failed laptops into the ‘Genius Bar’ (the in-store support desk) at Apple stores to request technical support.”

While you may be forgiven for thinking this would be a mild annoyance and covered by warranty, the complaint notes that this may actually not be the case at all.

Although every MacBook comes with a one-year written warranty, Apple routinely refuses to honor its warranty obligations. Instead of fixing the keyboard problems, Apple advises MacBook owners to try self-help remedies that it knows will not result in a permanent repair. When Apple does agree to attempt a warranty repair, the repair is only temporary—a purportedly repaired MacBook fails again from the same keyboard problems. For consumers outside of the warranty period, Apple denies warranty service, and directs consumers to engage in paid repairs, which cost between $400 and $700. The keyboard defect in the MacBook is substantially certain to manifest.

The keyboard has long been the subject of much derision among Apple commentators, with Overcast and Instapaper creator Marco Arment one of the most vocal. John Gruber has also labelled the keyboard as “one of the biggest design screwups in Apple history.” Now it’s time to see whether the law agrees. 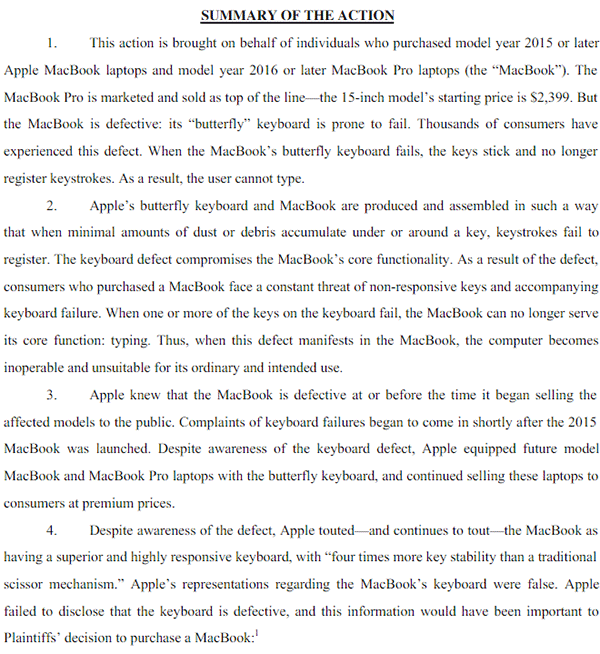