Apple patents are known to reveal technologies and features the company might be working on, or has at least looked into. This new patent, submitted in December 2009, depicts a location-based social network that allows users to locate people nearby that share the same interests. Vaporware or new friendships ready to be made? 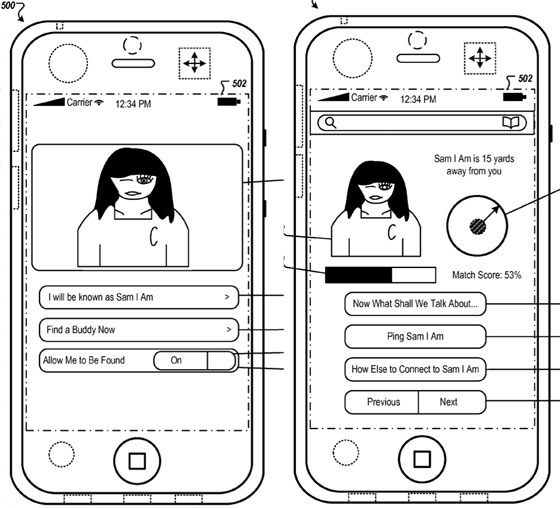 As you can tell by the detailed mockup above, you might soon be able to set a profile other people will be able to locate, find friends with similar interests as you and, of course, opt out of the service entirely. According to the patent filing, interests are determined by gathering the data that’s on each user’s phone:

If the system locates anyone with similar interests, it will display the person’s avatar, name, match score (the higher it is, the more you have in common with the person you’re viewing) and even how far away the person is, much like a game of hide and seek for iPhone users. Users would even be able to ping a user, presumably to let them know they’re coming.

Although not shown on the picture, the patent filing also hints at a possible "tap to chat" feature, allowing users to get a hold of their supposed soul mate:

For example, mobile device 104 can provide user interfaces for Adam to send Carol an email, to invite Carol to a chat, or direction indicators pointing to Carol’s location such that Adam can walk to Carol and start a conversation.

As with any patent filing, it’s important to note that this idea might never make it to a real-world product. Apple is known to file various patents a month just to call its it ideas its own, whether or not they’re used down the line.

If we see a similar feature, however, we’ll likely see it integrated with FaceTime or iMessage. Maybe location-based social networking has been the plan behind those two services all along, only time will tell.

(For the whole patent, check out its entry on the US Patent Office’s website)