It may not be entirely unexpected, but it’s disappointing nonetheless. Following the Australian Apple Store’s refresh overnight, it is now clear that Apple’s big Black Friday offers will not be all that big after all.

As usual the Australian Apple Store was the first to go live with the new offers thanks to the wonder of time zones, and assuming other international Apple Stores mimic what is being seen in Oz, this year’s Black Friday offering from the Cupertino firm is going to be even more underwhelming than usual. 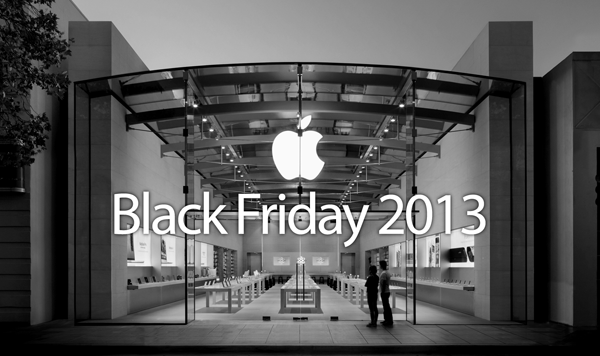 The state of play is this: buy an iMac, and Apple will give you a gift card to the value of $150. That’s Australian dollars, so around $137. Picking up a new iPad gets you a free $75 gift card, which is around $68 in the American equivalent. Obviously nobody knows just yet what the US, UK or indeed other international stores will be offering, and depending on interest rates and the like the deal may seem more or less appealing depending on where you live. Just keep in mind that you’ll be paying full price for anything you’re buying from Apple but you’ll get free gift cards thrown into the mix to make the whole deal a bit sweeter than usual. 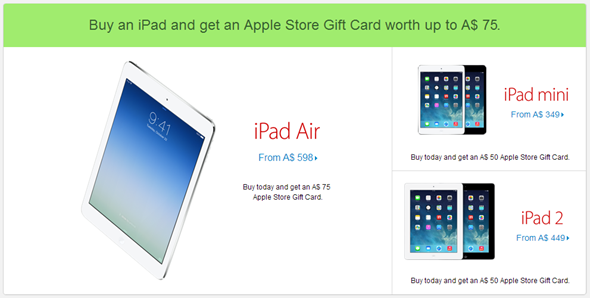 No matter how much Apple offers in gift card form though, we’d still rather see it offer some tasty discounts up-front rather than give free gift cards out. It’s better than nothing, obviously, but we’d expect the better deals to now be offered by Apple’s resellers and big box retailers. Best Buy is already offering discounts on some Apple hardware, and it will be well worth your time to shop around if you’re on the lookout for something with a shiny Apple logo on the back this holiday weekend. 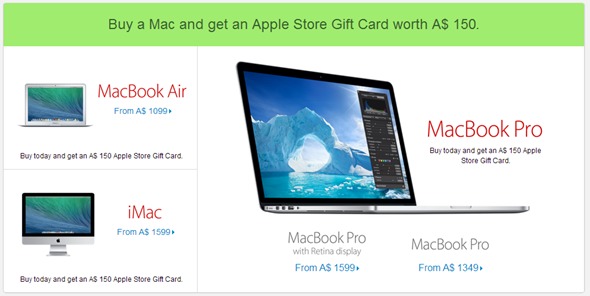 Apple isn’t exactly known for its blockbuster sales, after all, it knows that Macs, iPhones and iPads will fly off the shelves at full price anyway. Still, it’s always disappointing to see the biggest game in town refuse to throw its customers a bone every once in a while. We’re certain that even the above mentioned offers are enough to appease a lot of potential customers.

Now if you’ll excuse us, we’re off to try and find a bargain-tastic iPad.

There is some discount on select accessories as well. For full list, check out store.apple.com/uk

We’ll update the post again once deals in U.S. and Canadian stores are live. Stay tuned.

Update x3: Apple’s Black Friday sale is now live in U.S. and Canada. Like in Australia, you will be getting Apple Store Gift Cards on select Apple products and accessories. More on it on store.apple.com/us