Apple has continued its “if it’s not an iPhone, it’s not an iPhone” marketing campaign by releasing a third ad in the series via its official YouTube account. Cupertino company’s first two videos in the new marketing offensive involved one ad focused on the fact that Apple makes both the hardware and software to work together harmoniously, with the second commercial proclaiming that the iPhone comes with something “different” to other phones in an ad entitled “Love”. this latest release, entitled “Amazing Apps”, focuses on the plethora of applications available for iOS devices.

Today’s 30-second commercial is yet another example of the company attempting to convince users of why its iPhone is ahead of the competition by outlining exclusive smartphone features and benefits that it believes can’t be found on other platforms. Apple has always been proud of not only the hardware that it produces, but also the underlying operating system and additional third-party apps that are offered through the App Store. The Amazing Apps ad goes some way to showcasing the mind-blowing amount of titles available to owners of iPhones and iPads. 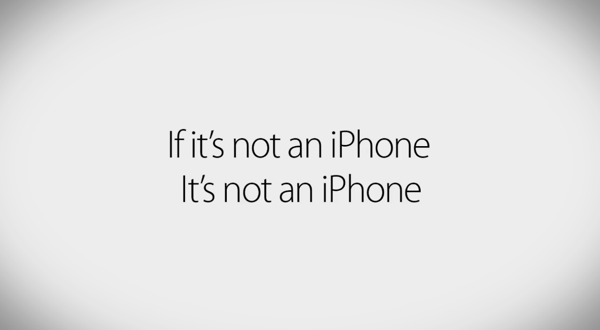 The “Amazing Apps” commercial is visually and audibly identical to the previous two ads in the “if it’s not an iPhone, it’s not an iPhone” campaign. Apple may have seemingly made a conscious decision to move away from the emotive, heartwarming commercials that it has become known for over recent years, but it’s still continuing with advertising videos that are immediately recognisable as Apple creations. The catchy, funky tune over the top of the video is yet again accompanied by a narration that informs the user of the video’s message:

Of course, the narration and direction of the video misleads users a little bit. The App Store may contain over 1.5 million apps, but we wouldn’t exactly call the whole lot “awe-inspiring”. However, there’s no denying that the App Store does contain some truly inspiring, unique and unbelievably innovative apps, which Apple is keen to push to users. Check out the video for yourself and see what you think.