Apple’s iTunes Music Store has just passed a significant milestone, having sold its 25 billionth song, once again entrenching its reputation as the world’s most frequented online music hub. As is always the case when Apple reaches a milestone, the downloader of track #25,000,000,000 – Phillip Lüpke from Germany – has received a very neat prize – in this case, a €10,000 iTunes Gift Card.

Whether one agrees or disagrees on whether 256kbps AAC files are, by their very nature, a good idea, there’s little dispute that Apple’s iTunes Music Store has revolutionized the digital music industry. Prior to the Store, which was popularized by the early iPod range, the major labels struggled to adapt to the changing ways in which consumers were sourcing content, and in terms of legal, accessible music portals, they were dwarfed by the abundance of P2P services.

The iPod and iTunes Music Store have not only been great for the record companies, but also for Apple, which has in turn evolved from a significant player in the technology industry to the world’s most valuable company. The infrastructure built around the iPod has helped subsequent products like the iPhone and iPad flourish, and what was once just a place for music and podcasts now boasts a plethora of content.

With no promotion prior to the milestone from Tim Cook’s men, there is no way Lüpke could have known his download of Monkey Drums (Goksel Vancin Remix) by Chase Buch would prove to be so valuable. €10,000 is a lot to spend on digital content, but with mountains of TV shows, movies, and several hundred thousand apps now available, he has a vast library (and buffer) from which to make his selections. 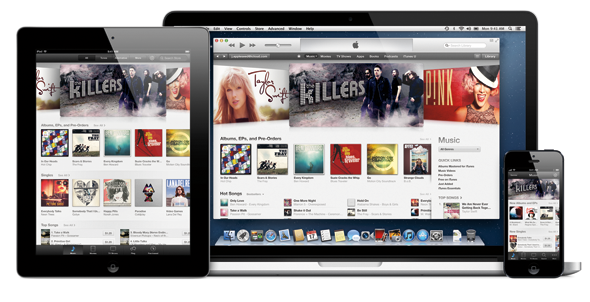 There’s no doubt that many still source their music by, let’s say, questionable means, but with 25 billion sold through iTunes to date, consumers are more than willing to pay so long as the price is right. Apple’s continued efforts to make available as wide a variety of content as possible will have certainly helped, and having – in more recent times – secured the catalogs of The Beatles and AC/DC, very few gaps now exist in the iTunes Music Store.