Android 4.4 KitKat Contest Now Live! You Can Win The New Nexus 7 And Play Store Credit, Here Are The Details

As most of you will know by now, the next version of Android is to be called KitKat, and the maker of the popular sweet snack has just unwrapped its contest as part of the promotional collaboration. Hitherto, the landing page has simply displayed a KitKat themed page, but now, the competition is very much up and running. With one thousand Nexus 7 2013 tablets to be won, and a plethora of other prizes including Google Play Store credit and KitKats, it’s definitely not a competition to be missed.

To get involved, competitors must purchase KitKat bars featuring the Android mascot (as pictured below), inside which will be a special code. By entering the code into the special landing page over on the Hershey’s Web site, entrants then find out if they have won something. 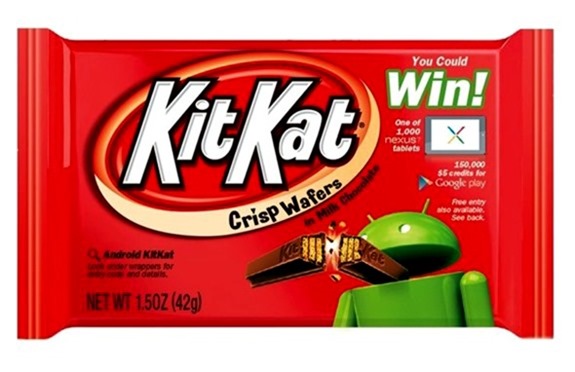 Of course, most will be looking to grab the new Nexus 7, which is by far the most appealing prize on offer. But still, $5 of Google Play credit is not to be baulked at, and with some 150,000 lots of credit available to competition winners, you could tot up quite a handsome sum for use to purchase apps, games, music, and other such niceties found over at the Big G’s content portal.

The decision to name the next version of Goolge’s mobile OS as Android 4.4 KitKat is rather bizarre, to say the least, and with the mobile industry completely fooled into thinking it was about to tuck into some Key Lime Pie, Android KitKat represents another bump containing perhaps rudimentary updates. At this point, Google hasn’t released any details aside from the release bracket, but it will certainly be interesting to see what the search giant has in store – especially so soon after the roll out of Android Jelly Bean 4.3.

The Nexus 5 is also the subject of much coverage at the moment, and is expected to be announced very soon, but until we hear anything official, you’re best off picking up few KitKat bars and hoping to get in among some of the good prizes available. Plus, KitKats are good. Not as good as the all-new Nexus 7 with its uber-sharp display, I grant you that, but still delicious nonetheless!

Coming back to the contest; once you’ve grabbed hold of the aforementioned Android-themed KitKat bar, head over to: hersheys.com/kitkat/android/ and enter your code to see if you’ve won anything or not.