Android 4.4 KitKat Is The Next Version Of Google’s Mobile OS

The naming convention for major Android operating system releases doesn’t take a genius to figure out. With each new big release getting a name based on popular sweets, and those names following the alphabet series, the next release after Jelly Bean was believed to be called Android 5.0 Key Lime Pie. Now, after an announcement by Google itself, it’s clear that isn’t quite accurate.

Announced via a photo posted to Twitter by Android SVP Sundar Pichai, the next release of Android will be version 4.4 and not 5.0, and rather than being called Key Lime Pie it’s actually going to go by the name of KitKat. That’s right, the four-fingered chocolate treat is now part of the growing Android family of sugary goodness.

Google has already erected a new statue outside the Google offices in celebration of the announcement, and it has to be said it looks pretty darn awesome – if a little scary! If that thing’s eyes glow red, we’re outta here!

If the naming of a new version of Android isn’t interesting enough, the fact that Google has used a name that is used by a company should be. We’re told that KitKat is getting in on the action too, with special edition KitKats being sold with the chance of picking up free Google Play credit or even a free Nexus 7 if you happen to buy the right one. We never seem to win anything like that, but we’re happy to eat as many KitKats as it takes to win on this occasion! There’s no word whether the special edition KitKats will be shaped like Google’s new robot, but if they are then the awesome meter just went up to 11. Maybe even 12! 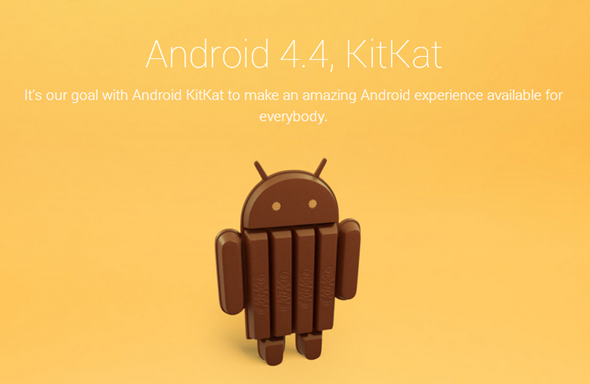 There are no details beyond the name and version number right now, but expect things to get bigger, shinier and faster than before with some additional bells and whistles thrown in depending on how iOS 7 goes over with the public when it is released later this month.

There is also no timeframe for when KitKat will be available, so don’t start hammering that update button just yet.

If you want more information regarding the release – which is scarce by the way – then head on over to: Android.com/KitKat