It’s commonplace for tech companies to mock competitors in ad campaigns, although in the mobile industry, it’s usually between arch-rivals Samsung and Apple. The Cupertino company has today bore the brunt of some ribbing from a different source, though, with Amazon’s new Kindle Paperwhite ad taking a not-so-subtle pop at Apple’s iPad. Since, as we learned just yesterday, the Kindle Fire HDX can more than hold its own against the new iPad Air (read: display is far superior), perhaps Amazon has a little lee-way to sound off, and although this compares the Paperwhite’s readability versus the iPad, it does seem as though Amazon is emerging as a real force in tablet circles.

The ad seems rather biased since, well, it looks as though the brightness on the iPad has been turned right down in order to better accentuate the Paperwhite’s reading prowess. The word Kindle has become synonymous with digital e-reading over the past few years, and while the likes of the Kindle Fire HDX outline the retail giant’s intention to branch away, products such as the Kindle Paperwhite will surely keep the bookworms happy. 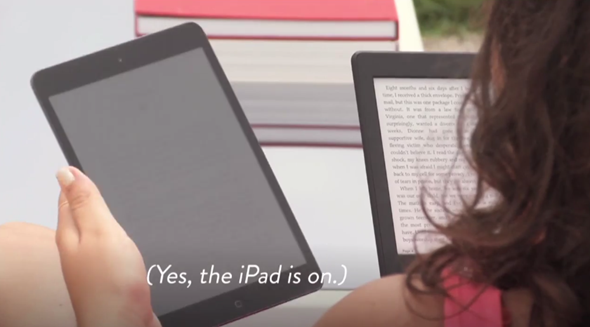 Of course, Amazon’s taking a shot at Apple and the iPad because, well, it’s the market leader and the most popular. The tactic has worked in getting the Kindle Paperwhite ad into the blogosphere, so, all told, it’s a job well done.

Having said that, from a technical point of view, the ad is a bit of a mess. I mean, sure, the iPad mini may not be as good an e-reader as the Kindle Paperwhite (especially not with the brightness turned down to minimum), or indeed any Kindle for that matter. But most tablets offer the viewing of digital books as something of an afterthought, and while this brief comparison may work to dissuade avid readers from getting an iPad – or any other slate – over a Kindle, those looking for something a little more general will probably look for a more versatile slab.

You can check out the "You’ve Got To Read It To Believe It" ad below, and be sure to leave your thoughts and comments, as ever, via the usual channels.