When you find yourself in the position that Apple is in as a company, it seems that you become an easy target for replication and parody. No company is whiter than white these days, but Apple has often found their work and announcements being mimicked and mocked a lot more than the average company in the technology industry. The latest business giant to take a pop at Apple is Amazon, who is using the recently announced iPad Air to advertise their own Kindle Fire HDX tablet that is available immediately for pre-order.

Opinion will always be split on the validity of companies using the announcement of others to promote their own hardware and software. If a product can’t survive on its own merits and what it offers to the end consumer then some may suggest that it doesn’t deserve to succeed and stand out in a very competitive market place. On the other hand, some are of the opinion that a little light-hearted jab at the competition is harmless and nothing more than clever marketing. It’s a dog-eat-dog world so I am definitely of the latter mindset. 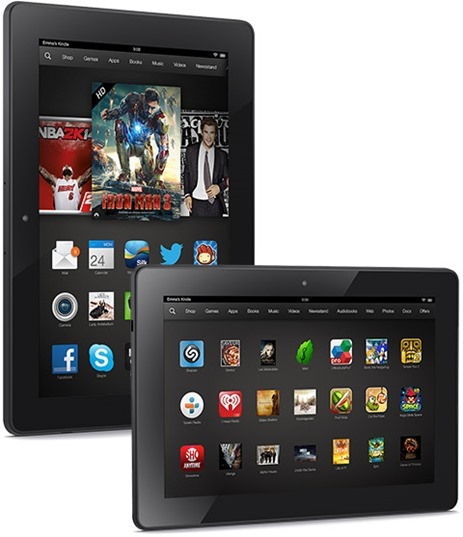 Apple’s recent announcement of the new iPad Air has once again signaled their intention to try and keep ahold of their market share of the tablet industry. Competing companies like Amazon, Samsung and Microsoft will obviously want to have their say in that matter, but Amazon is so far the only company to take a swipe at the iPad Air in their marketing material. The print advertisement that went live the day after Apple’s announcement shows a side on image of the Kindle Fire HDX with the tagline “Lighter than Air”.

It may not be to everyone’s taste but at least it’s factually accurate. Apple’s iPad Air weighs in at approximately 1 pound. The Amazon Kindle Fire HDX shaves a little off that total at 0.82 pounds. However, what the advertisement fails to mention is that we aren’t comparing apples with apples here. The full-size iPad ships with a 9.7-inch Retina display whereas the Kindle Fire HDX is a smaller piece of kit with a 8.9-inch display and form factor. We think an extra 0.18 pounds is more than fair to pack in an extra 0.8 diagonal inches.

The ad also forgets to mention Apple’s upgrade to a 64-bit architecture by way of the A7 processor that should obliterate the performance of the HDX. Lighter than the Air may be technically accurate, but not entirely a fair comparison.