Passionate musicians, music mixers, and fans of the musical remix and mashup will have more than likely heard of, and even extensively experienced ‘djay Pro’ app which has been available on the iOS App Store for iPad and Mac App Store for Mac for quite some time.

That musical experience has proven to be extremely successful for the company behind it, Algoriddim, and as such has encouraged the team to put in the necessary work to produce the same cutting-edge experience for Apple’s iPhone hardware. 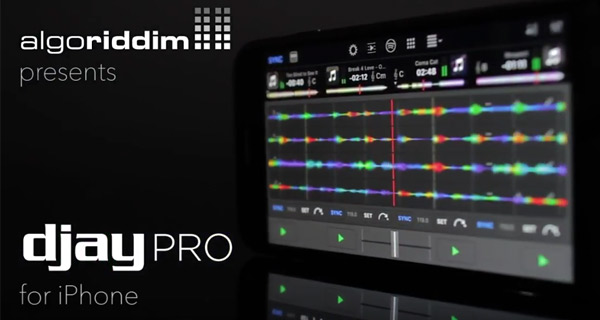 The release of djay Pro for iPhone now means that Algoriddim’s powerful and extremely addictive toolkit is now available on iPhone, iPad, and Mac, and officially supports all of Apple’s major mobile, desktop, and notebook hardware.

It’s actually quite bizarre to believe that the company is celebrating its tenth year in existence, which has already resulted in the release of some stunning software for a range of Apple’s devices, and is being celebrated with a limited time only 50-percent discounted promotion on the brand new djay Pro for iPhone release.

One thing that’s instantly reassuring about djay Pro for iPhone is that the interface is immediately recognizable to anyone who has used any of Algoriddim’s existing DJ software. That powerful DJ interface comes with support for multiple waveforms, individual jog wheels, a total of four decks in either landscape or portrait orientation, a powerful sampler experience, as well as the integration of video.

The software also boasts Spotify integration, providing immediate access to over 20 million songs, including pre-defined playlists and curated selections and albums. In fact, if you actually take a second to look at just what this app includes, you should be prepared to have your mind blown away.

There are advanced audio effects, powerful audio processing including advanced time-stretching, and even a more advanced set of DJ tools which includes synchronization, scrubbing, skipping and looping. Algoriddim has also polished off this release with hardware integration functionality that is capable of supporting devices like the Reloop Mixon4 and the Pioneer DDj-WeGO.

Built for iPhone and iOS 10, with support for 4K videos, VoiceOver, AirPlay and 3D Touch, the super impressive djay Pro for iPhone is available right now with a limited time 50-percent discount putting the price at $4.99.

(Download: djay Pro for iPhone from the App Store)