Everyone should have access to an Apple Store. It’s almost a basic human right – like clean water and McDonald’s. But while most countries have some sort of retail outlet peddling products fresh from Cupertino, not everywhere has an official Apple Store.

In fact, demand for an Apple Store can be so high, that fake stores pop up. Just take a look at China and its amazing fake Apple Stores – some would probably have Tim Cook fooled!

Well, now Afghanistan has its very own Apple Store, or a fake one at least. It may not have all the bells and whistles of Apple’s own highly polished stores, but it does the job so well that its owner manages to shift a couple of laptops and a few iPhones each day. 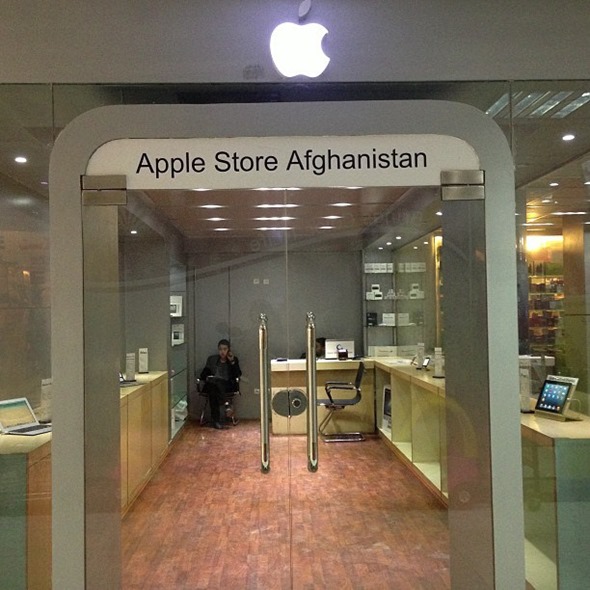 Located in the country’s largest shopping mall in Kabul, the store gets its stock at retail cost from Dubai. That stock is then sold to Afghan residents wishing to get in on the Apple goodness at just above US retail cost, which means enough profit for the store to trade.

It’s a somewhat a shame that the Afghan people can’t avail such luxuries since the job market in Afghanistan is pretty bad. It’s also worth noting that the people who do buy Apple products in Afghanistan fall in the age bracket of 25-35, so yes, young Afghans are really into their iDevices. And these very young people are those who are lucky enough to be having good jobs.

As expected, Apple products don’t come cheap there, either. For example, a 16GB iPad sells for a cool 800 bucks, yup, that is a lot of money if you’re asking us.

Apple products over there are somewhat a trend, since not everyone can afford them.

We doubt Apple will take this as a sign that it should expand its retail empire to include Afghanistan, but it does show Apple’s wide reaching appeal. Apple doesn’t just deal in products, it deals in a perceived lifestyle, too. Young Afghans certainly seem to want to be like their international counterparts, and an iPad or a Mac goes some way to achieving just that.

So now the only real question is this: how many fake Microsoft stores are there?

As one movie quite rightly pointed out a long, long time ago – "Build it, and they will come."