Many in the music industry may have hated it back when it launched, and some probably still do, but it’s arguable that Apple’s iTunes Store actually saved music. It may not have felt like it at the time, but iTunes and its DRM may have been all that stopped music from becoming even more of a piracy black hole than it is today.

Amazingly, the iTunes Store launched almost ten years ago, with the 28th of April being that anniversary. A lot has changed since then, both inside and outside of Apple’s Cupertino headquarters. Who would have predicted the iPhone and iPad back in 2003, let alone foreseen how hugely popular both would be.

Back then it was just the iPod, and iTunes was the perfect accompaniment for it. Apple lays all this out in an expanded iTunes timeline that it has posted to its website, showing how the iTunes Store itself has evolved over the last ten years. And is being dubbed as “A Decade of iTunes”.

These days of course, it’s not just about music. Firing up iTunes opens a world that plays host to all manner of video content, and for better or worse, mobile apps. Everyone is still arguing about whether iOS apps have any right to live within iTunes, but it hasn’t stopped the iPhone, iPad or iPod touch from being monumentally successful. The iTunes Store helped that along nicely.

The real question we find ourselves asking is a simple one: where will the iTunes Store find itself in another ten years from now? We suspect it will change quite a bit, especially if Apple gets its act together!

With the App Store, iTunes music store and all the on demand video now filling iTunes, we’re sure it will only go from strength to strength, however Apple decides to alter it. 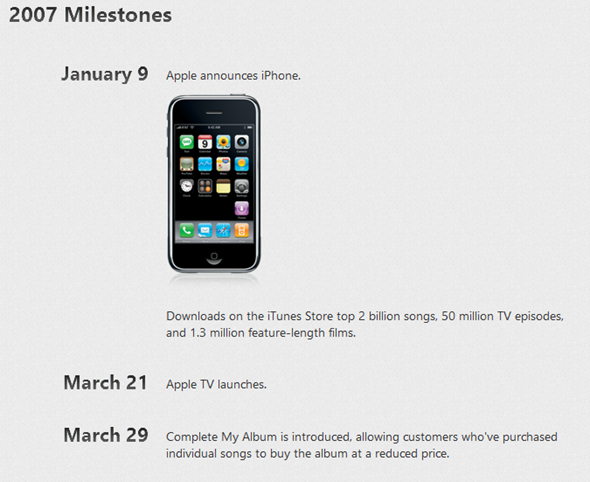 For now though, let’s all just take a moment to remember where we were when Apple kicked the iTunes Store out of the front door and let it loose on a music industry that was on its knees, and a fan base that was itching for a legal, easy and fun way to get content onto their new iPods. You can’t argue with the results, whether you were an iTunes believer, or not.

We’re talking to you, record companies!