I make no secret of the fact that I am a massive jailbreak enthusiast. I have owned every iPhone since 2007, and both iPads and have eagerly jailbroken each and everyone of them as soon as the relevant tools are released or updated for the new devices and firmwares. I do it not just for the sake of it, but because I genuinely believe a number of tweaks and modifications which exist in Cydia enhance iOS and make it the best mobile operating system available.

With that said, like most regular jailbreakers, I have a core set of tweaks which I install as a matter of course. They range from installations which change the default behavior of iOS right away through simple aesthetic modifications which I obviously understand is a matter of personal preference. One of my personal preferences when it comes to visual modification, is having the ability to change the name of the carrier network, to give my device a little more personalization. In the earlier days, this was possible using the Make It Mine (MIM) tweak which has now been integrated into SBSettings, or more recently using the Fake Operator tweak which both essentially provide the same outcome.

But to my delight, a new addition to Cydia by a developer known as jivhg has quickly found a place in my must-have tweaks list for all of my jailbroken devices. The tweak has been given the name ‘Zeppelin’ and exists to change the default carrier text, but it does so with an excellent twist. Instead of having a user specified string of text, Zeppelin offers the ability to set a carrier theme which places a lovely logo into the placeholder.

This may not seem like a ground breaking piece of software, but to my knowledge it is the first tweak which allows an actual logo to be set in place of the network carrier’s name, and it certainly adds a touch of flair and panache to the device. Zeppelin comes pre-installed with eleven default themes ranging from an Android logo to a lovely, full color Superman emblem. The tweak is also powerful enough to allow new themes to be applied on an adhoc basis, meaning the customization is pretty much endless and users can give their device an entirely unique feel. 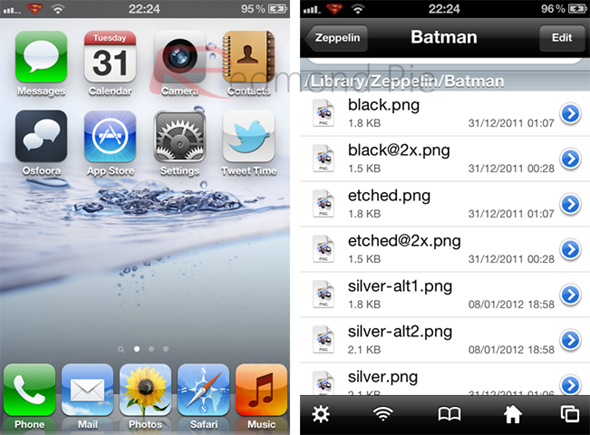 Zeppelin themes are stored in /Library/Zeppelin and each theme appears to be made up of a number of images which have different names to differentiate them for each state the device is in, including an @2x png file for Retina-ready devices. Adding your own user-generated theme is as simple as creating the relevant images and uploading them to the device to the relevant directory. Once added, the theme can be selected via the settings entry panel with it being visible once the device has undergone a respring. 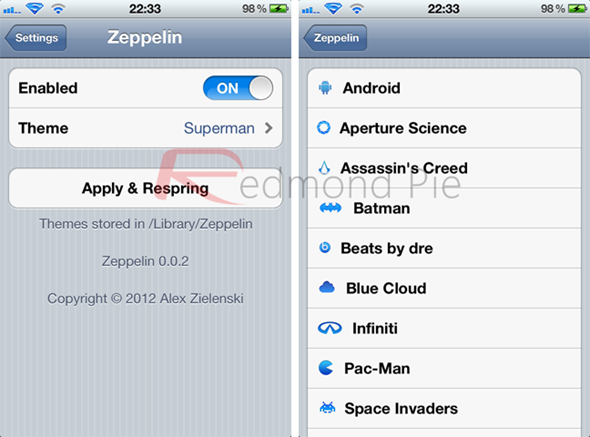 One thing I did notice, is that if the device already has a custom network string set using the Make It Mine feature of SBSettings, this needs to be deleted first as Zeppelin does not take priority and will not overwrite it. Zeppelin is available free of charge on the ModMyi repository and has been proven to work with the iPhone, iPad and iPod touch.