Another day, another iPhone tweak. This time we have a genius little tweak called PictureMe, bringing both timer and rapid shot functionality to the iPhone’s camera app. 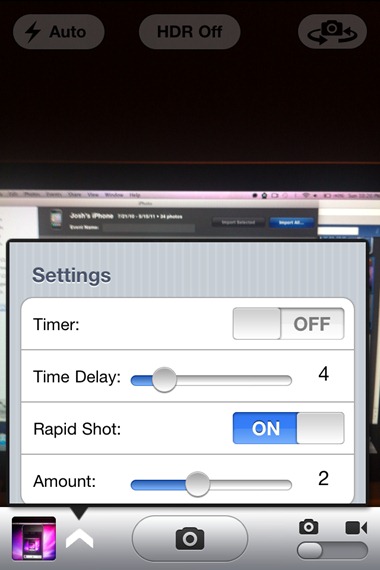 PictureMe is a small, simple tweak that adds a few options to Camera.app via a new button that’s added after installation. Tapping said icon presents users with options for turning the timer and rapid shot functions on and off, with settings to select the delay and number of photos to take for each option.

The timer offers a delay anywhere between zero seconds to 25 seconds in 1 second increments, with the rapid shot function giving the option of taking up to 5 photographs in sequence.

Adding the two main features often requested by iPhone users, this $1.99 tweak will be available soon via the Cydia app store, although there is no word yet as to when ‘soon’ is. Follow joint developers Tyler and Filippo on Twitter for the latest news on when PictureMe will be landing.

ModMyi’s Joshua Tucker has put together a short video to show off how well PictureMe works, and what strikes us is just how seamless the whole thing is. It’s almost as if Apple had coded it themselves. Of course, with iOS 5.0 around the corner, there’s nothing to say Apple won’t be adding this functionality sooner rather than later.

UPDATE: PictureMe is now available on Cydia under BigBoss repository.