It didn’t take a genius to predict that Absinthe 2.0 would be insanely successful with the jailbreak community as soon as it was released by the Chronic Dev Team and their Dream Team colleagues. And thanks to the latest release, the jailbreak goodness can now be enjoyed by iPad2,4 owners. With the developers pushing the release button on Friday after their presentation at the HITBSecConf, servers were immediately overloaded with freedom seekers attempting to get their hands on it.

Official statistics from the Chronic Dev Team have confirmed that over a million devices have been jailbroken using the latest version of their tool, a figure that includes a quarter of a million third-generation iPads. Undoubtedly, the tool has been a resounding success for the jailbreak Dream Team, part of which is down to the fact that Absinthe is a one-click jailbreak solution, perfect for jailbreaks of all technical levels.

With a new update of Absinthe and Rocky Racoon being officially pushed out, it looks like the number of jailbroken devices is set to rise as the tool now includes support for the Apple iPad2,4 model, which is a late Wi-Fi only version of the iPad 2. A previous release of Absinthe, version 2.0.2, also brought support for the new iOS 5.1.1 9B208 build which Apple bizarrely released for the GSM iPhone 4. For those who have been keeping abreast of the Absinthe development since the launch of 2.0, it is obvious that those involved have been working tirelessly to offer as much support as possible.

Legendary developer Planetbeing has been actively seeking individuals with the iPad2,4 model who are able to test the untether across multiple operating systems to ensure maximum compatibility for anyone who may need it. With the help of the enthusiastic and resourceful community, testing has obviously proved successful with the time being right to push out this latest version of Absinthe. The release of Absinthe 2.0.4 Rocky Racoon v1.0-3 means that the highly alcoholic software now works with iOS 5.1.1 on the following devices: 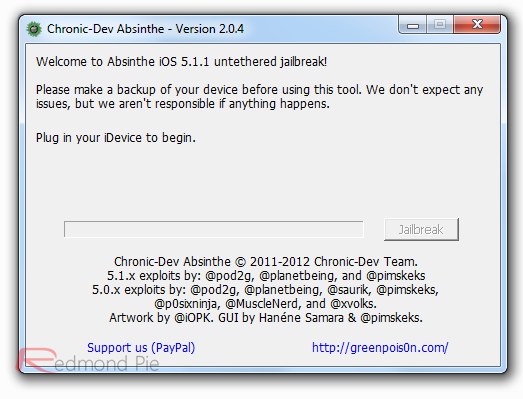 If you are yet to experience the power of a liberated iOS device and you are running iOS 5.1.1 with one of the devices listed above then check out our tutorial on using Absinthe to achieve an untethered jailbreak 5.1.1. Welcome to freedom.