A ‘Safe’ Galaxy Note 7 Has Reportedly Exploded, Destroyed MacBook Pro In The Process

It has been a tense few weeks for Samsung with regards to its flagship smartphone; the Galaxy Note 7. After issuing a worldwide recall to replace defective Galaxy Note 7 devices, it looked as if the company was finally moving on and starting to rebuild its reputation.

However, right now it looks as though that plan has been thrown into doubt with a fresh report of what allegedly should have been a ‘safe’ replacement Note 7 device bursting into flames, not only causing damage to property, but also burn injuries to the owner, a 25-year-old Hui Renjie, a resident of China. 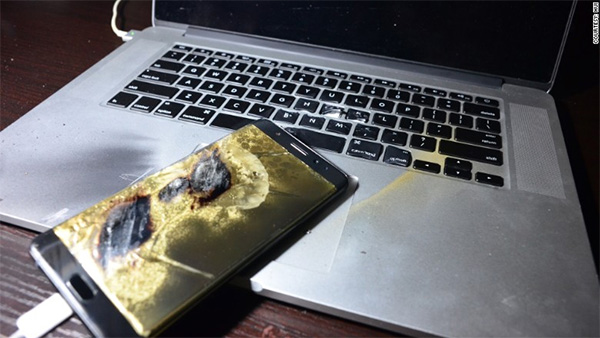 Renjie purchased a new Galaxy Note 7 device deemed to be safe from an online retailer over the weekend. Given the fact that Samsung’s worldwide recall has been in place for a while now, which affects those devices already purchased as well as stock held by retailers, Renjie rightly assumed that the purchased hardware would be fit for use with little to zero chance of spontaneously exploding or catching fire. It appears that he was incorrect, with the Note 7 catching fire on Monday morning, causing damage to his MacBook Pro and burning two of his fingers in the process.

According to the Renjie, Samsung was quick to react to the incident with a visit, but there wasn’t exactly a great deal of trust between the two parties:

The incident caused minor injuries to two of his fingers and burned his Apple Inc. MacBook. A Samsung representative visited him soon afterward and asked to take away the phone, he said, but he declined the offer because he doesn’t trust the company to reveal the reason for the fire, and plans to publicize the issue.

Without knowing the exact history of the Galaxy Note 7 in question it’s very difficult to condemn Samsung as a business for allowing yet more defective units to make it into public hands. If this is indeed a ‘safe’ set, delivered to the retailer after the recall, and supposedly non-defective and fit for purpose, then Samsung has a very big issue on its hands, not only to rebuild its faltering reputation, but to also work out exactly what’s going on with these devices. However, if this is an original unit that has stayed in inventory without being sent back to Samsung, then it would appear to be the error of retailers rather than Samsung itself.

Either way, it doesn’t stand the Korean company in good light. We await more information on this one, but if you are a Galaxy Note 7 owner, either with an original or replacement device, then be very careful with it.