5 Reasons Why You Should NOT Update To iOS 10 Today

Here are 5 reasons why we think you should NOT update to iOS 10 today on your compatible iPhone, iPad or iPod touch device.

The time is finally upon us! Now that iOS 10 is here for compatible iPhone, iPad and iPod touch devices, there will undoubtedly be a ton of device owners that are sitting on the fence as to whether or not they should update their devices. There are compelling reasons for and against an immediate update, and with this post, we’re going to cover five reasons why you should postpone this update. 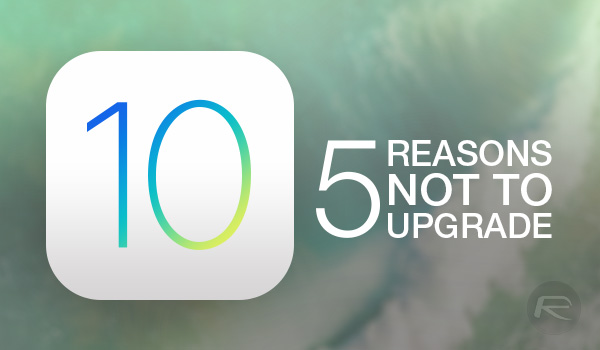 This one is really a no-brainer; if you value your jailbreak, and can’t imagine an iOS experience without being liberated from Apple’s walled garden, then stay well and truly clear of this iOS 10 update. iOS 9.3.3 is the latest version of iOS that can be jailbroken, which means that seeing that beautiful Cydia icon is not possible with an iOS 10 device. Of course, this could always change in a matter of days, or it could be weeks, even months before we see a publicly available tool available for the latest update. As always, we’ll be keeping you up to date on the status of iOS 10 jailbreak.

Keep viewing the following for up to date information on the matter: Jailbreak iOS 10 / 10.0.1 For iPhone, iPad, iPod touch [Latest Status Update].

Make no mistake about it, regardless of how many pre-release betas Apple seeded, and regardless of how many bugs the company fixed during the testing period, the first public version of iOS 10 will have teething issues. These could manifest themselves in the form of battery drain, or even performance and lagging issues when interacting with apps and content. It’s likely that they will be fixed in an iOS 10 point release going forward.

Developers have had more than enough time to interact with the iOS 10 SDK and get existing apps ready for this release, but that doesn’t mean that they’ve actually been proactive enough to do it. With every major platform release, we see apps fall by the wayside as developers choose not to put in the work necessary to offer compatibility. Be aware of your most important apps and check as to whether they offer that all-important iOS 10 compatibility.

You can find some of the apps that are already compatible with iOS 10 here: iOS 10 Compatible Apps For iPhone And iPad [List].

If you’re travelling with sketchy or intermittent cellular data or Wi-Fi access, then it’s probably a good idea to wait until you’re in a place with reliable coverage before proceeding with the update. On release day, millions of devices from across the globe will be pinging Apple’s update servers to get access to the latest and greatest changes introduced with iOS 10. You could end up just frustrating yourself if you try to join in that crowd. Also, in case any goes wrong during or after the update, it could make things worse.