The Surface is undoubtedly going to be a very popular hardware creation for Microsoft, and even they themselves might be a little surprised at the early interest in the Windows 8 powered device. Those who are wanting to get their hands on a 32GB version of the tablet will be a little disappointed today as the online Microsoft Store is showing it as out of stock with expected delivery now being pushed back three weeks.

The company is obviously still accepting pre-orders of the tablet via the online Microsoft Store, with the 32GB version which comes without the black Touch Cover proving to be the most popular, with initial stock of the tablet already depleted. The fact that it is the cheapest model at $499 probably has a lot to do with it, as early adopters are eager to try out the hardware without actually investing a massive amount of money in it.

It is worth noting that three weeks shipping date is only relevant to the online store, so if you are in the market for the cheapest Surface available then it might be prudent to locate the nearest official Microsoft Store and be prepared to spend a few days out in the wild to be one of the first to get the device when it launches on October 26th. Alternatively, the 32GB and 64GB versions of the tablet are still available that ship with the Black Touch Cover if you are desperate to get your hands on one of the first batches when it launches. 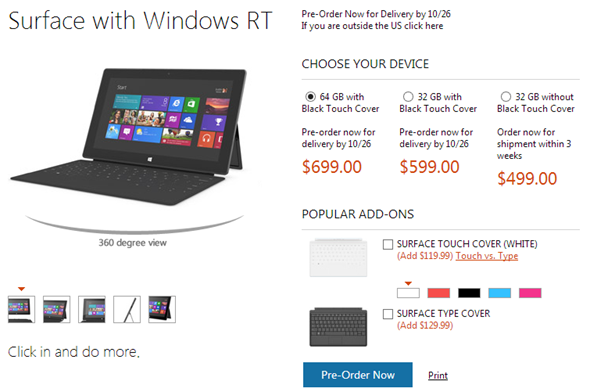 If you plan to go up a notch; Microsoft is offering the 32GB version of the Surface for $599, with the 64GB version costing $699. Both come attached with the fabulous Touch Cover in black. Those who managed to get their pre-orders in before the stock depleted will no doubt be eagerly awaiting delivery of the Microsoft tablet that offers front and rear-facing 720p HD cameras, as well as an integrated kickstand, Windows RT and a preview copy of Microsoft Office Home and Student 2013.

As the official advertising campaigns kick in for Windows 8 and the Surface tablet, interest in the product is only going to go one way so it may be worth while biting the bullet and getting that order in now to make sure you aren’t disappointed come launch day.