You can’t please all of the people all of the time but it seems that Apple’s new 2018 MacBook Pros are doing a fairly good time. And the latest statistics won’t do anything to harm that.

Geekbench 4 scores are showing that Apple’s new MacBook Pro models are offering 12% to 15% in single-core performance over last year’s models, with even better numbers being produced for multi-core performance.

It’s very unlikely that Apple will ever take the opportunity to massively overhaul the MacBook Pro range overnight. So, with that in mind, what we are used to actually getting are incremental increases and improvements year-on-year. Not everyone will purchase a brand new MacBook Pro every twelve-month cycle but the hope is that by the time they do then the range has changed and improved enough to see a huge improvement.

These latest metrics show that the MacBook Pro has actually taken a significant stride forward in just the last twelve-months, offering a fairly large year-on-year improvement over the equivalent 2017 models.

The numbers are extremely exciting and encouraging from a multi-core perspective. The Geekbench 4 scores show an improvement of a multi-core score of 22,439, which equates to an improvement of 44.3%, scored on this year’s 15-inch 2.9GHz six-core Intel Core i9 processor model with included Turbo Boost up to 4.8GHz when compared against last year’s best-available model. 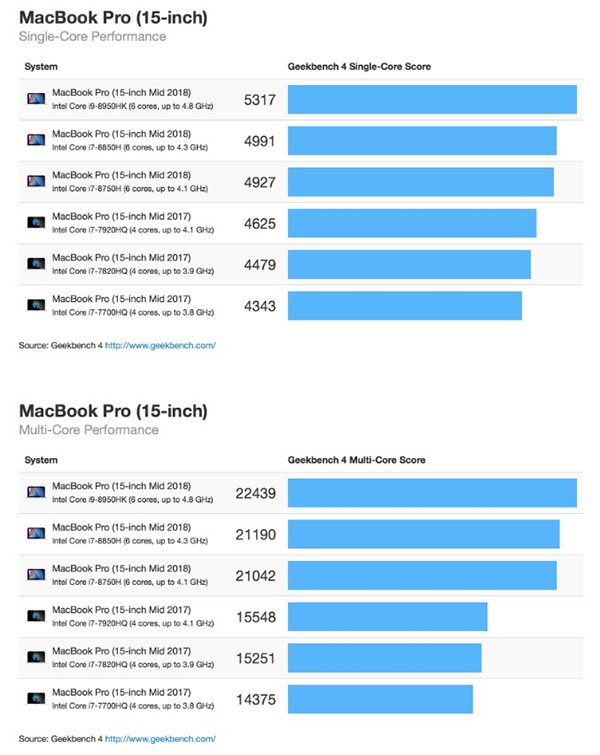 Results for the 13-inch variant of this year’s MacBook Pro also show similar improvements, with a 13-inch 2.7GHz quad-core Intel Core i7 processor turbo boosted up to 4.5GHz pulling in a multi-core score of 17,557 compared to last year’s 9,550. This represents a staggering 83.8% performance increase. 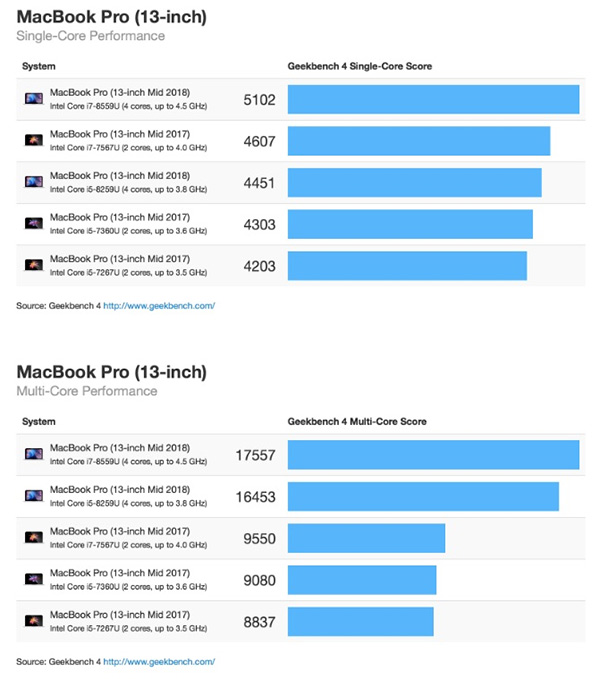 John Poole, the founder of Geekbench, believes that the notable performance increases can be partly attributed to the additional cores, higher Turbo Boost frequencies, and the fact that Apple has moved the new MacBook Pro models over to using DDR4 RAM. This is all extremely positive for the consumer who may be interesting in moving across to the new MacBook Pro from an older model, or trading in something like an Air for something a with a bit more power and performance.

It is, however, worth noting, that performance will vary from device-to-device and that the Geekbench results aren’t always reflective of real-world performance once the machine has been loaded up with apps and other personal installations.