The prominent and often-accurate analyst is now focusing on the future of Apple’s hardware, suggesting that the company’s next flagship will arrive at market with liquid crystal antenna modules which are designed to offer faster LTE transmission speeds to consumers.

In a research note issued to investors, Ming-Chi Kuo has suggested that Apple will update the design of its iPhone antenna system to include improved liquid crystal polymer LTE modules which are capable of delivering significantly improved LTE transmission speeds. The information suggests that the new iPhones will come with two antenna modules, similar to the current iPhone X flagship, but based on LCP technology to support 4×4 MIMO standards:

This new research note follows on from Kuo’s predictions last week that Apple will upgrade to Intel’s XMM 7560 and Qualcomm Snapdragon X20 modems in its next wave of smartphones, a move which is designed to enable faster LTE transmission speeds. Both of those modems offer support for 4×4 MIMO technology. This will allow faster LTE speeds by increasing the number of data connections which are possible between the device and the connected cell tower. Moving from 2×2 MIMO to support for 4×4 MIMO essentially doubles the connections. 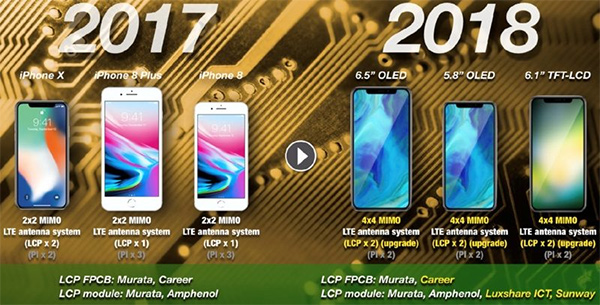 This new technology will presumably be made available in the three iPhone models Apple is said to be working on for a 2018 release. Those models are said to include a 5.8-inch OLED model which would essentially be a second-generation iPhone X, a larger 6.5-inch OLED version which would likely be referenced as a “Plus” sized iPhone X model, and a 6.1-inch LCD model which will appeal to the lower-end of the market with a reduced price point.

All of those devices will reportedly have the edge-to-edge display experience as well as Face ID and faster LTE speeds if today’s research note is to believed.