First grand slam tournament of the season – the 2010 Australian Open Tennis Championship is about to begin. The tournament which starts on 18th January will last for 14 days till 31st January 2010. Online streaming sites such as UStream, Justin.tv and the official Australian Open website will be broadcasting the event LIVE. You can watch the top tennis players in the World including 15 times grand slam champion Roger Federer, as they all compete for one of the biggest prized crown of the year.

You can follow the action Live through one of the following ways.

Tennis Australia in association with IBM brings the official iPhone app for the 2010 Australian Open Tennis Championships. You can follow the Live ball-by-ball coverage, scores, results, draws & schedule and live twitter feed from the Open right on your iPhone and iPod touch. This app can be downloaded for free from iTunes App Store here. 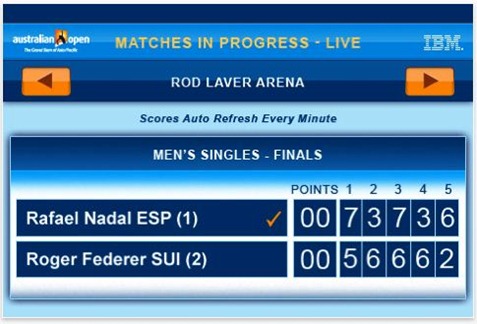 UStream is a an online video sharing and streaming site that provides a platform for broadcasting live video. Some members of UStream.tv have setup channels which streams the action Live from Australian Open 2010 Championship. You can access these channels here.

The famous online streaming and sharing website Justin.tv will be broadcasting the event Live on various different channels. You can watch the action Live from all the courts in high quality from the one of the channels found here.

The official Australian Open website will be streaming action from more than 150 matches which comprises of about 300 hours of LIVE tennis action for $22.95 (10% off) on australianopentv.com. This 10% discount offer is valid till 18th January only. You can sign up for this service by following this link here.