New video of the 12-inch Retina MacBook has just surfaced, and it gives a comparison versus 11-inch mid-2013 MacBook Air. Head past the break for further information and a look at the video as well.

The new MacBook is yet to be launched on April 10, but the machine that has many of us enamored with its exquisite detailing and design has already made a few rounds on the Internet, which includes an unboxing video, and a leaked set of benchmark scores on Geekbench. The latest video comes in from Rozetka, and unlike the earlier video, attempts to compare the machine with the older MacBook Air through a side-by-side comparison. 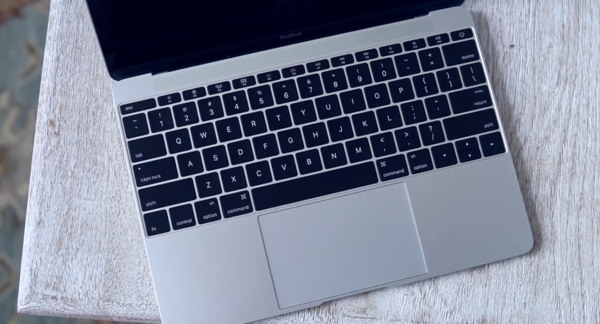 The video focuses on some of the features that most Apple fans already know about, such as the Force Touch trackpad, the sleek and almost flushed keyboard, and most obviously the USB-C connector which is the only port to be found on the machine, barring the 3.5mm headphone jack. As pointed out in the video, the new ultra-thin and ultra-light MacBook – which measures 0.51-inch at its thickest point – is as almost as thin as the original iPad which came in at 0.50-inch.

For those who didn’t notice this earlier, no more does the Apple logo illuminate, as the Cupertino giant goes with a more flushed, chrome finished logo, a design element found in the newer iPhone and iPad lineup. The unreal dimensions of the machine are likely to be the reasons behind this move. So thin is the new MacBook, that Apple had to make use of a new contoured style battery for it to provide over 9 hours of battery life to the user.

The new MacBook is due to be launched on the 10th of April, and will be available to purchase in silver, space grey, and gold color options in the United States, Canada, France, China, Germany, Australia, Japan, Hong Kong, and United Kingdom. The notebook’s price will start at $1,299 and will go up to $1,599.