Samsung has just released an official bend test video of the Galaxy S6 and Galaxy S6 Edge, in an effort to fight off its very own ‘bendgate’ scandal that has rocketed on to the scene. In its new video, Samsung tells everyone that the Galaxy S6 does not bend in “normal daily use.” Head over the jump for some background to this story and a look at the video.

Just a few days back, a bend test video of the Galaxy S6 Edge emerged which revealed, in a series of tests, that Samsung’s new flagship bends and cracks more easily than the iPhone 6 Plus. In the words of SquareTrade: “So is this bendgate 2? No, but for Samsung fans it may be worse; instead of a bent phone, they may have a pocket full of glass.” 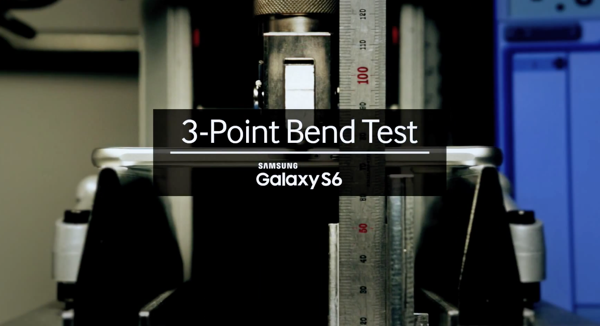 Samsung decided it would not take such insult and will fight back with facts. To start off, Samsung simply referred to SquareTrade’s video as one meant to “satisfy sadistic pleasures.” Interestingly, Samsung reached to the conclusion that 66-pounds of force best simulates real-life scenario, after the company itself has just jumped onto the rather controversial three-point bend test.

“First, the video assumes a very specific condition – 110lbf (50kgf), which rarely occurs under normal circumstances. The normal force that generated when a person presses the back pocket is approximately 66lbf (30kgf). Our internal test results indicate that the Samsung Galaxy S6 and S6 edge are not bendable even under 79lbf.” Let’s not even get into Samsung discussing how the test does not show the true strength of the backside because hey, you should be careful with the direction you pocket your phone in.

Last year’s Galaxy Note 4 launch advertisement carried the tagline “The Galaxy Note 4 is big, thin and light but strong.” 66-pounds is what Samsung finds to be the maximum pressure which can be exerted onto the phone when sitting; and by that theory, there should have been no bent iPhone 6 Plus devices either, and I won’t dare say there weren’t any. However, all this explanation, and ridiculing lab tests as “sadistic pleasures” has definitely raised more questions rather than providing answers.

Take a look at the video yourself and you be the judge on what Samsung thinks.