The folks over at the Evleaks Twitter account are nothing if not prolific. Often the first to leak screenshots, spy shots and specification lists, Evleaks is one of the go-to places for finding out about unannounced smartphones, and they proved once more that they should be on everyone’s follow list today.

Whilst everyone else is still pondering the acquisition of Nokia by Microsoft, the Evleaks guys have released a new screenshot that will be of interest to fans of both the Redmond company and the latest company to be assimilated into it.

Nokia is believed to be working on a new Windows Phone-powered handset that will be announced this month, codenamed Bandit, or the Lumia 1520 as some people are calling it. Packing a 1080p screen, the new device will be the first to Windows Phone device to feature a 1080p screen, and that means that Windows Phone itself will need an update – something Microsoft is working towards with Windows Phone 8. We hadn’t seen anything to show how the Windows Phone home screen would perform on new, higher resolution devices with larger screens – until now.

The latest leak by Evleaks shows what they claim to be a screenshot from the new Bandit handset that Nokia is currently getting ready to announce, and it gives us our first insight into how Modern will use those extra pixels. In short, it’ll offer more icons, which is no great surprise to anyone.

Looking at the screenshot, Windows Phone 8 will follow the same icon layout options as its predecessor, with small, medium and large icons available for users. By contrast, Windows 8.1 on the desktop will be getting a new wider icon option, but at this point it doesn’t look like that will be making the jump to Microsoft’s smartphone platform. 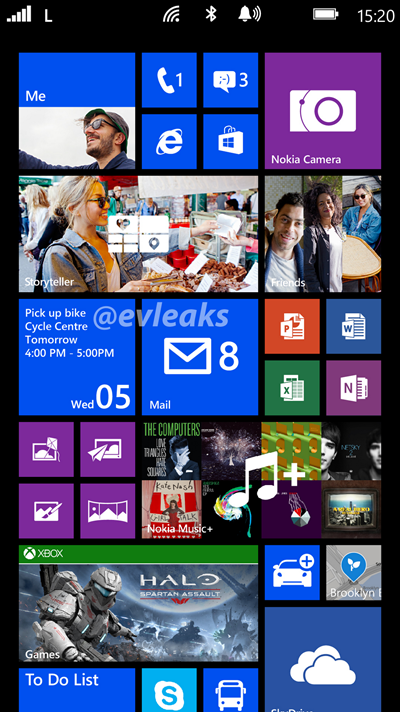 Also new in the screenshot is an app called Storyteller. There is absolutely no information on this currently, but we have a sneaky suspicion that it will involve photos and location data in order to build a timeline of sorts. Useful, if you like that kind of thing.

Nokia is expected to announce the new phone alongside a Windows RT tablet device at an event on September 26th. We will keep you updated as soon as we get our hands on new details.