You Can Play PS4 Games Through Xbox One [VIDEO]

If you’re lucky enough to be able to pick up both a PlayStation 4 and an Xbox One this holiday season then there’s one party trick that is sure to have your friends green with envy, and if we’re honest you can probably put us in that bracket too.

If you’ve been keeping up on your Xbox One news then you’ll already be aware that Microsoft’s new console can connect to a cable box as part of its new focus on television content. A byproduct of this is that the Xbox One features an HDMI pass-through system that can theoretically be used for any means, and that includes, amazingly enough, the ability to actually play a PlayStation 4 via an Xbox One console. Yes, that’s right, and we’re not even making this up. 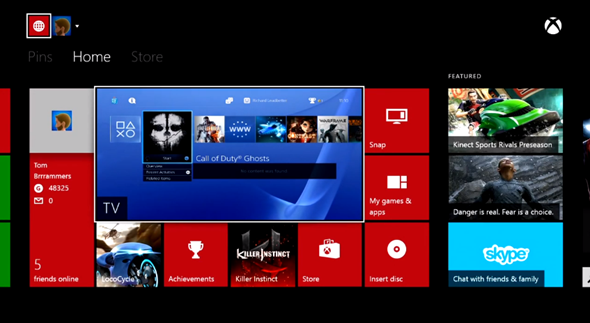 The Xbox One features a picture-in-picture view which means it’s entirely possible to have a PS4 game playing on top of the Xbox One’s Dashboard which, in our humble opinion, may be the most beautiful yet mind-bending thing we’ve ever seen. Even if it’s pretty pointless – the idea of having two next generation consoles powered on at once just to play one game may be a little excessive even for the most hardcore of gamers.

On the plus side, what doing something like this achieves is to cut down on the number of HDMI ports needed, which is always a good thing. Having said that, if you’re the kind of person that has two next generation game consoles at launch, we’re pretty confident you’ve got an HDMI port or two to plug them into!

The Xbox One has gone on sale in different parts of the world and the PS4 went on sale just a few days ago, making the coming weeks and months some of the most interesting in modern gaming history, and we can’t wait to see where this current-next generation takes us. With both packing pretty powerful hardware, and a gaming title lineup which is sure to improve as time passes on, it will be interesting to see which console wins the race in the long run, and more importantly; which console promises to be the most useful.