Broadly speaking, the Cloud is still a work in progress, but Microsoft, like Google, Apple and a number of other key companies offering their cloud-based services, has been working hard to improve its OneDrive offering. Today signals a big step in the evolution of the software giant’s cloud efforts, with Xbox Music integration permitting users to store and playback a variety of different music formats on multiple devices free of charge.

It was rumored some time ago that Xbox Music and OneDrive would enjoy closer ties looking ahead, and as of now, any tracks stored in your Music folder on OneDrive will be ready to play via the Web or the Xbox Music app. With support for Xbox Music app on Windows 8, Windows Phone 8.1, Xbox 360 and Xbox One, it’s a fairly significant announcement for music fans invested in Microsoft products, and with Music Pass subscribers also being treated to 100GB of space to store tunes – 20GB for non-Music Pass subscribers – the Office maker doesn’t appear to be scrimping. If it wasn’t clear enough, you don’t need Xbox Music Pass for this to work. 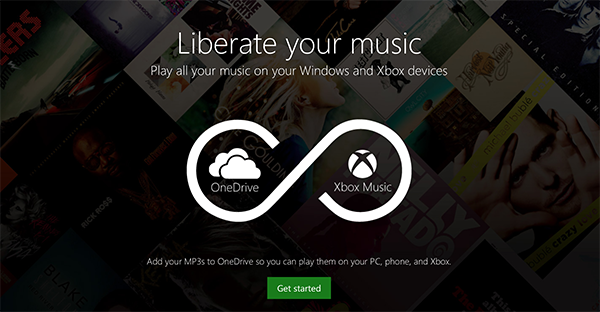 The main benefit of this integration is that users will be able to free up on-device storage and keep their vast libraries of music in the cloud. This does, quite naturally, put an added strain on bandwidth, but if local storage is more precious to you than data allowance, you might want to consider migrating everything to OneDrive from here on in.

Any song placed in your Music folder will need to be MP3, M4A, or WMA to play through Xbox Music, so there’s no support for higher bitrate options like FLAC, but as a starting point, this helps Microsoft to draw parity with Google et al in the world of streaming music. Indeed, it’s almost a like-for-like as far as Google’s Play Music service is concerned, and with 100GB of storage as opposed to the rumored 20GB, it seems that the Windows maker is really looking to make a statement in this field.

Having run a series of OneDrive promotions in recent months, one of which offered a cool 100 gigs for no cost whatsoever, Microsoft looks more than down for the battle. With Windows 10 looking promising, the company is well-placed to increase OneDrive’s market share through 2015, and given the numerous consumer and enterprise-level features to be packed into the impending OS update, there’s no question that OneDrive will be playing an integral role in proceedings.

Head over to: music.xbox.com/onedrive to get started.