Yet Another Claimed Galaxy S III Image Surfaces, May Be Really Real

A new photograph of what appears to be the unannounced Samsung Galaxy S III has shown up, giving all of us impatiently waiting for Samsung’s July announcement in London, something to keep us going for a while.

Oh Samsung, why can’t you just let us get a look at the next Galaxy S smartphone and put is out of our misery?  With Samsung’s Galaxy S III announcement event not due to happen until May 3rd, we look set to have another week or so of rampant rumors and speculation, and probably at least another couple of leaked photos or press images that purport to be of the unannounced handset.

Today has seen another of those images show up, with BGR receiving a photo from one of their tipsters that is supposedly of the new Samsung Galaxy S III, and whatever it actually turns out to be, it’s enough to get us interested. 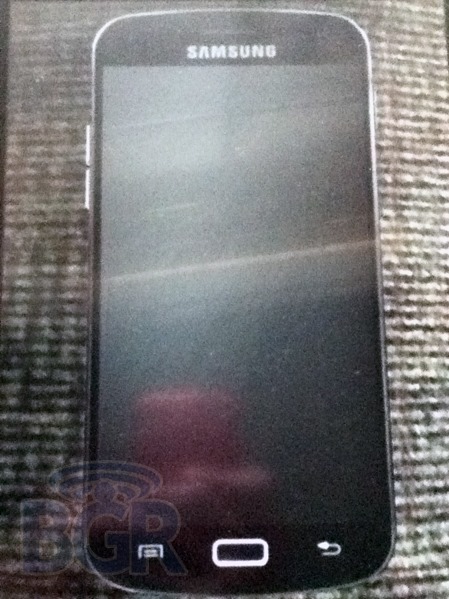 The photo, face-on to a mystery Samsung smartphone, show what looks to be edge-to-edge glass and a hardware button flanked by two soft buttons. The layout appears to fit with a rendering of a Galaxy S III that showed up recently, which obviously adds a little to the whole thing’s believability. If this is indeed Samsung’s next super-phone, then we have to say we approve, at least at face value!

May 3rd just cannot come soon enough for people that have held of upgrading their smartphone in anticipation of Samsung’s latest and greatest. Both the Galaxy S and S II have sold extremely well and have almost taken over from the Nexus range of Google handsets as the Android phone to get for many. After a disappointing Galaxy Nexus showing, Samsung will be hoping for a return to form with the Galaxy S III.

BGR itself is playing coy with this latest leak, refusing to get too excited that this is the real deal. We may only have a week or so to wait before we all find out for sure, but we have a niggling feeling that this may be the Galaxy S III in all its glory. That said, we’ve been wrong before you know.

Apart from our opinion, what do you think, is this the real deal or just a fake mockup to get us all excited about the Galaxy S III? You know where to drop your thoughts.