Xbox One Units Now Being Showcased At Microsoft Stores [VIDEO]

The battle for supremacy in the next-gen console wars is really heating up, to the point now where every day, either Microsoft or Sony has something to reveal regarding their respective consoles. With the latter having disclosed the PS4 release date for the whole world to drool over, today is Microsoft’s turn, and the Redmond company now has the Xbox One on display for all to see at it own retail outlets. Unfortunately, they’re securely housed within the confinements of glass boxes, but with many consumers still on the fence with regards to which console they will eventually choose, a close-up look at the new design could tempt some into going ahead and pre-ordering.

The appearance of the Xbox One has caught quite a bit of flak since its grand unveiling, with some claiming it looks rather too much like a set-top box. Microsoft’s insistence on discussing the general entertainment prowess of the console at the announcement stage, rather than its raw gaming credibilities, left more than a few fans bemused. Still, although the aesthetic of the Xbox One does perhaps forgo some of the 360’s “cool” factor, the vastly-upgraded hardware, improved Kinect and Blu-ray drive mean that most confirmed Xbox users will be picking up the Xbox One when it does become available.

Microsoft Stores dotted around the United States now have the console on full display, and although it would be rather better if the company were to plug the thing in and allow gamers to get a taster of that next-gen experience, this would perhaps spoil the surprise. 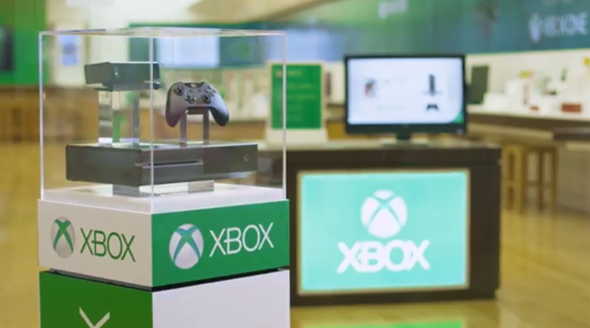 As well as a glimpse of the rather boxy console, prospective consumers can also take a glimpse at the altogether prettier sight that is the new controller. The second-gen Kinect is also on parade, and considering how popular the original Kinect was when released back in 2010, it’s no surprise that the new Kinect is no longer an optional peripheral. While this has, in turn, driven up the cost of the console overall, Microsoft will be hoping that the continued popularity of Kinect will entice users away from the lurking presence of the PlayStation 4.

So, if you happen to live near a Microsoft Store and wish to see what the Xbox One looks like in all its glory, head over and check it out!