Xbox One Smartphone Concept Is Jam Packed With Insane Features; We Wish It Was Real! [VIDEO]

Microsoft’s Xbox One will serve as one half of the next-gen games console battle, and while many fans of the powerful upcoming machine have been busily deciding which launch titles to select as the holiday release draws ever closer, the folks of T3 have instead been dreaming of a smartphone built with the new console in mind. Justifying its ‘Xbox One smartphone’ concept, T3 imagines a device born through lack of Windows Phone apps and CEO Steve Ballmer’s “one Microsoft” mantra, and with a typically solid-looking Nokia build and a set of eye-watering features to match, we actually kind of wish this were a real product.

There’s no doubt that Windows Phone, despite its inherent beauty and unique quirks, is struggling in the sea of Android handsets and iPhones. Although Nokia continues to show an almost blind faith in the Redmond company’s ecosystem, there’s no doubting that the lack of apps currently gracing the Windows Phone Store will be of much concern to the Finnish telecommunications giant, but with a smartphone offering dual-boot Windows Phone 8 and Xbox home, many of those issues could be swept firmly under the carpet.

The design of the Xbox One smartphone is certainly reflective of the console itself. There’s that two-tone gloss / matte finish going on across the back of the handset, and if the software maker were to build such a device, you feel that this is perhaps how the end product would look.

Speaking of the back, there’s a 15-megapixel snapper to the rear, but it’s far unlike any run-of-the-mill point-and-shoot lens. The specially-designed Kinect camera features 3D depth sensors as well as motorized tilt, and all that without any apparent bulge in the form factor. 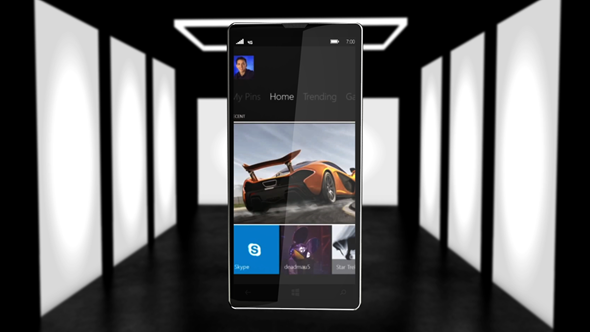 It features so-called “SmartGlass 2.0,” which would allow a player to do their gaming just about anywhere, hooking the device up to a controller or Xbox One with apparent ease.

Of the specs, the Xbox One smartphone features a 5-inch full HD display, NVIDIA Tegra 4 processor, and a whopping 4GB of RAM. With 4G LTE and 64GB of onboard storage, I think it would struggle to fall below the level of expectation even the fussiest smartphone number counter would require, and with genuine credentials as a gaming device, would certainly be the cat among the pigeons if it ever saw the light of day.

Thanks, Rhiain for sending this in!