Rather than just plucking out a random day from thin-air, Xbox LIVE’s Major Nelson has posted a rather teasing countdown that shows the number of days left until the E3 Electronic Entertainment Expo in Los Angeles, prompting intense speculation that Microsoft intends to introduce the world to the next-generation Xbox console.

Microsoft is listed on the official E3 expo website as occupying booth number 4100 during the convention with the official Xbox website given on the exhibitor page, so it all looks good for us to receive at least some next-gen Xbox related news and announcements. Speculation was rife a number of months ago about the possibility of the Xbox 720 being imminently announced and released to the public, but that excitement seems to have died down a little bit thanks to the large promotional push that the Redmond company have had around Windows 8 and the Surface tablet.

The current Xbox 360 has been an absolute smash hit for Microsoft, selling over 70 million units in the last seven years, but with sales starting to tail off and the company struggling to find inventive ways to spark consumer excitement about the ageing console, the time has most definitely come to see what the future holds for console gaming. The countdown time on the website also provides a link to the E3 Expo website with a final date of June 11th being given for the timer to end, which is when E3 begins in LA. 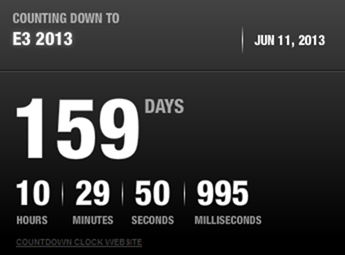 The convention may still be five months away, but it seems that Microsoft is keen to get gamers excited and raise some adrenaline levels with plenty of advance notice. We are still hearing murmurings around the web that are suggesting Microsoft may blind-side us all by revealing the next-generation Xbox console before E3 actually begins and use the convention as a forum to go into greater detail about the hardware but there is no evidence to back those claims up.

Mark the date in your diary gaming fans, it could be a blockbuster of a year for both Xbox and PlayStation alike!