It really isn’t a secret that Microsoft has grand plans to roll out a next-generation gaming console, thanks to a number of technical and aesthetic specifications spreading across the world wide web in the last few months. The video game industry is staggeringly large and generates billions of dollars in revenue on an annual basis for the top players in the game, so it shouldn’t come as a surprise that the Redmond based company have their Xbox department busy producing something remarkable to capitalize on the hype.

Regardless of whether you sit on the Xbox or PlayStation side of the fence, the purported Xbox 720 looks set to ruffle a few feathers and possibly convert a few PS3 fans over to the dark side of gaming when it is officially announced. If the details contained within a leaked 56 page document are anything to go by then it seems like 2013 will be the year which will formally introduce us to the 720, with a number of intricate and technical details also being outlined in the paper. The internal document, marked as for discussion only, dates back to the fourth quarter of 2010 and discusses a number of proposals which may or may not still be relevant today. 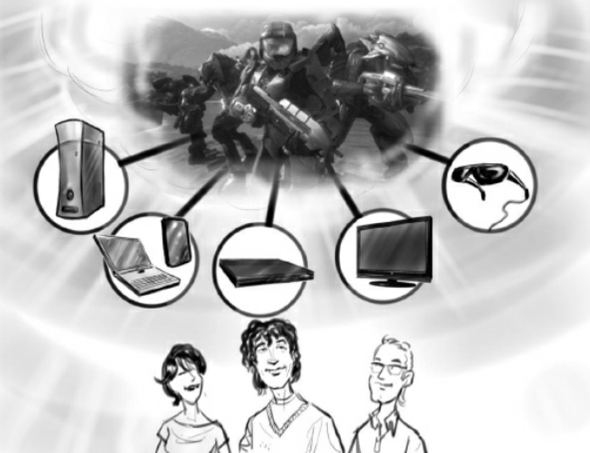 In a section that is titled ‘2013 Overview’, topics such as why Microsoft need a next-generation console and what areas of the market a 720 could exploit are outlined in detail through the use of in-depth flow charts and bulleted lists covering the key areas. It looks like Microsoft believe that current Xbox 360 sales will show noticeable decline by next year, and will also face threats from eight-generation consoles from Sony and Nintendo. The limitations of the current Xbox 360 are also discussed in the same section of the document with one of the most prominent being the total lack of modern entertainment capabilities such as Blu-ray playback and native 3D output.

Continuing through the leaked information, the contained information also provides an overview of the console that is actually referred to as the Xbox 720. It is noted that the device itself will have an improvement of X6 the performance of its predecessor, and will also provide Kinect v2 processing capabilities for the new version of the motion detecting hardware which will bring a much improved 3D play space as well as improved voice recognition. True 1080p and full 3D viewing is also listed as features of the gaming console, as well as connectivity options for glasses, sensors and various other unannounced peripherals.

The glasses mentioned in the documents go by the name “Kinect Glasses”, which more or less function in the same way as Google’s Project Glass, and brings an augmented reality experience to the user. But for some reason, the details on the project is very scarce. This is something which we’re really looking forward to, just imagine the great living room experience which the Xbox provides coupled with augmented reality, mind blown!

One aspect of the document which resonated the most with me is the section that outlines the Apple TV and Google TV gadgets as stiff competition. The document then goes on to describe the Xbox 720 as "The only box you will need for premium living room entertainment". As is always the case with leaks such as this, it really is impossible to tell if it has come from a genuine source or whether it is an elaborated and well presented hoax. Regardless of the category this document falls into, one thing is for sure, video game and entertainment fans should be excited about what Microsoft will bring to the table next year.