The definitive line between mobile devices and computers is disintegrating year by year as our smartphones and tablets get more powerful, more intelligent, and come pre-loaded with many desktop-like features.

That said, there are plenty of apps which morph a smartphone or tablet into a PC or Mac peripheral – knocking it down a peg or two and putting it in its place. As the app makers have discovered, the smaller devices can potentially make rather good remotes, mice, trackpads and makeshift set-top boxes.

Although there are plenty of the above, we don’t often see a smartphone used as a microphone – despite each device sharing the common denominator of listening to a user’s endless drivel.

WO Mic, by Wireless Orange, turns your Android smartphone into a virtual microphone for your Windows PC. It allows you to connect via Bluetooth, USB, or Wi-Fi, although as you’d probably expect, a special client program and driver needs to be installed in order for your PC to recognize your device’s newly-acquired sound-magnifying abilities.

Although some PCs – particularly laptops – do already harbor a microphone as standard, it’s always nice to know the mobile can double-up in case of emergencies. In fact, there is scarcely a situation where a smartphone fails to adequately stand in for bereft PC hardware, since, as well as the aforementioned, our pocket devices also make very nifty Wi-Fi hotspots. 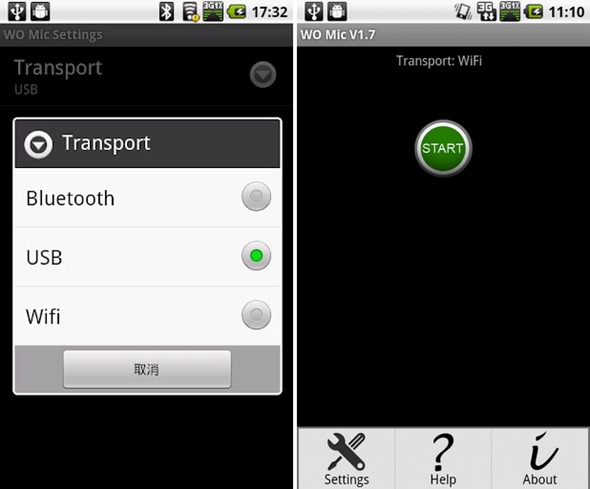 Whether you’re an avid Skyper or just like the sound of your own voice (which, in my experience, is most people), then this could just be the perfect app for you. The response from early adopters seems to be positive, but the only way to ascertain whether it’s a keeper or a sleeper is to download it yourself and give it a go – links at the bottom of the post.