Here’s a pro tip for anyone out there who is broadcasting live on television, but has yet to take the plunge and upgrade to the latest version of Microsoft’s Windows operating system. A recent live weather broadcast from news broadcaster KCCI 8 didn’t go exactly as planned thanks to Microsoft’s attempts at reminding everyone to upgrade to the latest version of Windows 10. Meteorologist Metinka Slater was going through the usual process of trying to inform the good people of Iowa of the upcoming weather conditions when she was unexpectedly interrupted by a “Microsoft recommends” upgrade alert, informing everyone watching that the network is yet to take the plunge and move across to Windows 10.

Any Windows user will be well aware that Microsoft is very keen to try and get users to upgrade to the latest version of Windows using these intrusive upgrade alerts. In fact, if you are actually running an older version of Windows, and are eligible to upgrade, it’s generally a good idea to go through that process sooner rather than later or be forced to have Microsoft “recommend” an upgrade whenever the company sees fit. Of course, it’s even better to upgrade if you’re using your Windows machine as part of regular live broadcasts on television in front of thousands viewers. 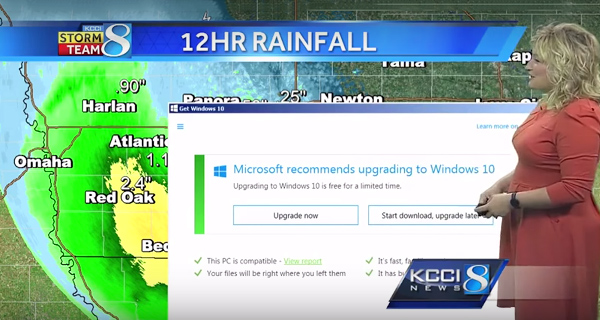 If you’re going to be on TV as a broadcaster, then you really do need nerves of steel and an ability to deal with any eventuality that may occur during a live broadcast. Slater made her company proud with the way she handled the situation by quickly dismissing the notification from view, and even managing to get an almost instant humorous reply in.

Her exact words in that moment:

Microsoft recommends upgrading to Windows 10, what should I do? Don’t you love when that pops up!

And that was the end of that potentially embarrassing situation as Metinka carried on with telling Iowa about the weather; ever the consummate professional as she finished her broadcast and let the programming carry on as normal.

Technology is definitely in place to make things easier for us, and certainly helps a wide variety of companies go about their business, but this is a timely reminder that sometimes it can just get in the way.