Who Will Buy The iPad 3? [INFOGRAPHIC]

With us only about a week away from the rumored iPad 3 launch date, AYTM (aptly an acronym for Ask Your Target Market) have prepared an infographic about the shiny upcoming tablet that answers various questions about consumer intent to upgrade, and consumer use of the previous and current iteration of the device. 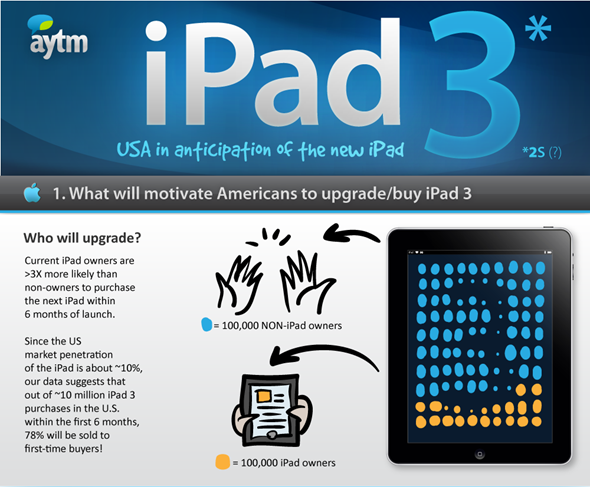 Rumored to boast a 1GHz, quad-core A6/A5X processor, 4G LTE, Retina Display (meaning the resolution will be bumped up to a whopping 2048×1536), and even an 8MP camera, this is certainly a major update to the device that is sure to outsell even the hottest of hotcakes, we know this already without needing to glance at an infographic. But for what reasons? And to who? And how are people currently using iPads?

The data was collected through two surveys conducted this month by AYTM. One survey questioned 2,000 Americans who did not own an iPad, while the other polled 500 who did.

Some of the information as to who will buy iPad 3s was quite interesting. For example, the survey suggests that current iPad owners are three times more likely to upgrade than non-iPad owners. The motives for upgrading were also different based on whether users owned a first-generation iPad or an iPad 2; for example, the improved CPU is more of an incentive to owners of the first-gen iPad to upgrade. Retina Display serves as a motive for 19% of current owners – of both generations – to upgrade.

It’s fair to say though, that, no matter the motives, the iPad 3 will be an insane sellout. Should the rumors prove correct, the iPad 3 will pack the main features that people have been lusting for (such as Retina Display; and even without it, people went out and purchased the iPad 2). Thus far – as of Q1 2012 – a total of 55 million iPads have been sold. It’s quite crazy. In fact, iPads account for 33% of Apple’s total revenue. So, on top of current amount of iPad owners upgrading to the newer device, there will also be a good amount of new purchasers who were either holding out for a certain improvement (or just for the iPad 3, if they assumed that they ‘waited too long’ to purchase an iPad 2), or just new buyers in general who have only recently decided to add an iPad to their technology ecosystem.