When Will Your HTC Android Device Get Ice Cream Sandwich? Here’s A Complete List With Time Frame

Despite actually being an altogether solid OS revision, Ice Cream Sandwich has struggled to reach the number of devices Google would have liked. Up until a couple of months ago, when Samsung’s Galaxy S II began getting a taste of Android 4.0, the total number of Android devices running the latest firmware was around one percent – which is, by anybody’s reckoning – disastrous.

Since the aforementioned Galaxy S II implementation, though, ICS has become a great deal more widely-used thanks to OTA updates for a sleuth of devices, and HTC, which has lagged behind Samsung somewhat in the pecking order, has announced via its website as to when its expansive range of devices are scheduled for an OTA update of their own.

While the DROID Incredible 2 doesn’t have an ETA as far as Ice Cream Sandwich is concerned, the Amaze, the EVO 4G+, the Sensation family (including the standard model, 4G, XE and XL), the Velocity 4G and the Vivid should all see the latest and greatest iteration of Android by the end of next month.

The Desire S, EVO 3D, the EVO Design 4G, the Incredible S, Rezound and Rhyme should have gotten their Ice Cream Sandwich by the end of July – a timely entry at the very height of summer. The HTC Thunderbolt and Desire HD – two of the most popular devices on the company’s roster – could take up until the end of August, and while it’s certainly good to have some clarification, the amount of time it appears to be taking is certainly cause for concern.

Because each OEM likes to add its own personal flavor to Android, the process of distributing the newer versions to consumers has become a tiresome rhetoric, whereby your device and manufacturer can prove to be the difference as to whether you see an update in January or June.

It is thought Google is looking to eradicate this trend – encouraging vendors to concentrate on competing in the hardware stakes as opposed to spending months on end optimizing the OS to include a bunch of additional features.

However, here’s the complete list of devices which will get ICS along with the time-frame: 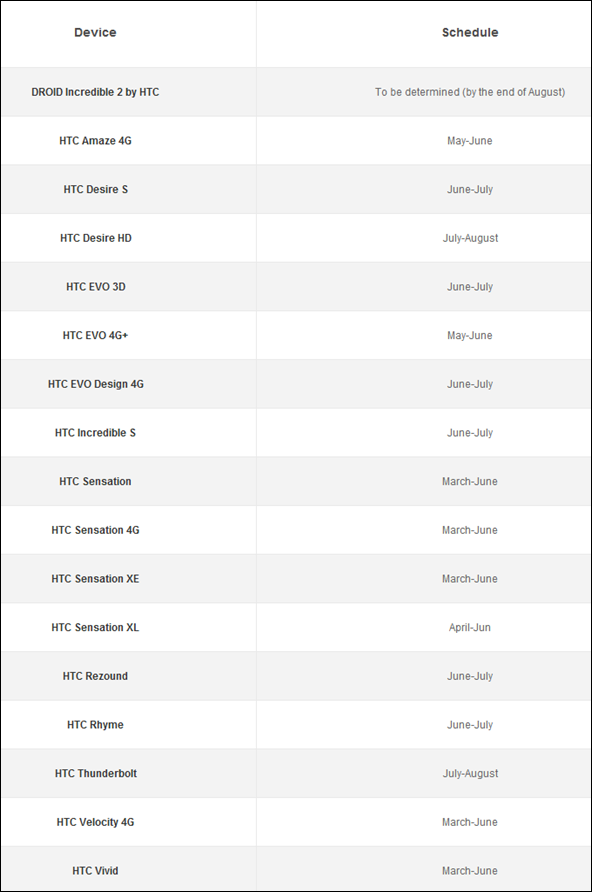 As gadget fans, we can only but hope this is true, so Android fans can enjoy new updates in future at an iOS-esque pace.