WhatsApp Voice Calling Feature Rolling Out For Some Users [Screenshot]

The WhatsApp voice calling feature has been spotted running for a few users, and it is expected that the rest of us could soon be getting our hands on it. Head on after the jump for further information on this development.

We’ve been hearing for quite a while that WhatsApp has been working on its own Viber-like voice calling feature for its users, which allows for two-way audio calls over a cellular or Wi-Fi network. It has also been rumored and concluded that this feature could start rolling out to users by the end of 2014, but we’re almost a month up and into the new year. However, thanks to one of our readers, it’s now certain that the voice calling feature has been enabled for some, and we can expect a larger rollout some time soon.

It’s been reported that the voice calling feature gets turned on for users when they receive a WhatsApp call from another member that has the feature enabled on their handset. Presumably, this is how the feature is being activated for each user out there, where a call from one friend to another is serving as an invite-like system. So let’s hope someone in your friends’ circle, or their circle and so on, has gotten his/her hands on this awaited feature.

But at this point in time, it’s important not to get your hopes up just yet, as we’re hearing news from different sources that calling other WhatsApp users does not always end up enabling the voice feature. To be on the safe side, and provided you’re on Android, you may want to grab the latest APK from WhatsApp’s website – whatsapp.com/android – and see if the feature is enabled for you on the first run. But again, it’s not proven that this method actually works, so there’s that. 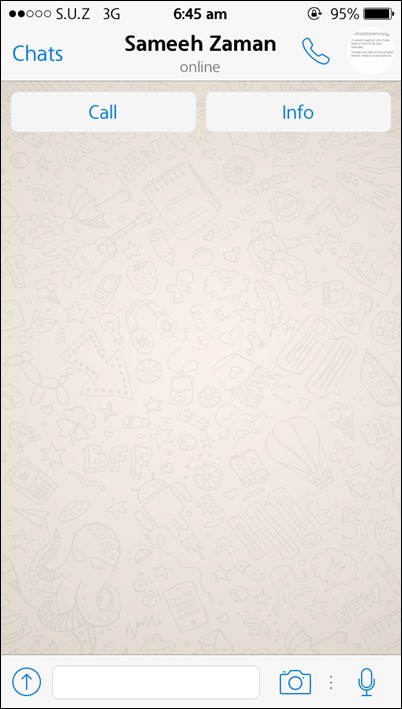 WhatsApp Web Client is something most users will have to content themselves with till the calling features is rolled out to the masses, and given the non-guaranteed activation method, it would be just pure bad luck to have a call received from your friend but not have it enabled on your phone as a result.

The screenshot displayed by the user, shows nothing extraordinary really, with a ‘Call’ button added to the main interface.

If you’re a WhatsApp user and have the voice calling feature enabled on your handset, then do share your experience with us in the comments section below.

Thanks, Sameeh for sending this in!