Popular instant messaging app WhatsApp has received a new update, bringing a much-needed addition as well as one that you may not have known you wanted.

The key change with version 2.18.100 is the arrival of support for the iPhone XS Max, meaning WhatsApp now fully supports the new, larger iPhone.

Prior to this update, WhatsApp did not fully understand that it was functioning on a 2,688 x 1,242 display, meaning there were some scaling issues for those using Apple’s latest, and largest, iPhone. Thankfully those issues are now a thing of the past, with WhatsApp now fully iPhone XS Max compliant.

Other changes include the alteration of the contextual menu that is displayed when users press and hold on a chat bubble. Previously, WhatsApp would display the standard iOS popup, but with the new update in place it instead displays a custom interface that runs vertically, rather than horizontally, and makes it easy for users to star, reply to, forward or otherwise interact with a specific message.

We would normally prefer standard iOS interfaces to be used, but in this instance, the redesigned approach absolutely makes the most sense.

Additionally we also get hints of a cool new dark mode for the future, which not just includes darkening of the interface, but the iOS keyboard as well. Pretty neat! 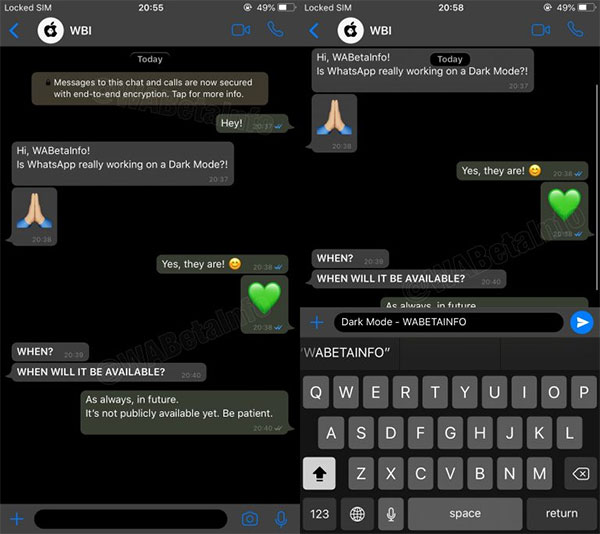 Other improvements include the fact that audio messages are now played in sequence, removing the need for users to select them individually, as well as improved reply options when viewing user status messages.

The newly updated release of WhatsApp can be downloaded from the App Store now and is, as ever, a free update. If you’re a WhatsApp user, you’ll definitely want to download this.