What Will Apple Call The iPad With 7.x-Inch Display?

The murmurs and speculation with regards to Apple’s entertainment of a smaller iPad has fluctuated over the course of the past six months or so, and although the fruit company dominates the tablet market with an iron fist, bloggers, analysts and commentators seem generally convinced Apple will release a downscaled tablet to see off a lingering threat.

Apple’s slab is so far ahead that, the term "iPad" is often synonymous with the word "tablet", and when people see a large slate with a screen on one side and a camera on the other, they invariably assume it’s designed by Apple in California. 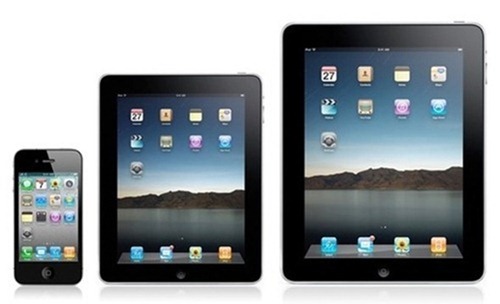 It still remains to be seen whether the device – which is thought to measure in around 7.85-inches – will actually reach fruition, and the release of Google’s cheap-yet-powerful Nexus 7 certainly created the biggest tablet-related furor yet. Not much has emerged in terms of evidence in relation to actual evidence of the small iPad, but the consensus is that Apple will drop a down-priced, downsized, and somewhat downgraded slab to fend off the likes of the Google and ASUS collaboration.

Whether it will release or not is still up in the air, but another point of contention is with regards to its name. Apple has used many different monikers to describe a smaller device, including nano and mini, but the blogosphere seems pretty confused as to the name of the next iPad.

The tentativeness to make a decision will not have been helped by Apple’s decision not to name the third iPad, and given the scarce information with regards to what some are billing as a certain and imminent release, it’s little wonder nobody seems sure what it may be called.

The "mini" moniker seems to be the general favorite, and there are plenty of reasons why this could be the case. The Mac mini fills the same game in the computer market as the smaller iPad would in the tablet market – a cheaper device catering to those who cannot afford the premium prices Apple charges for its flagship products. That said, the last mobile device to release with "mini" attached to its name was the iPod mini, and Tim Cook’s company has moved on a great deal since those days.

"iPad nano" is also a possibility, and although there is still an iPod nano range, the name would not be confusing to consumers. It’s practical, gives an accurate overview of what the device represents, and I see it as the second most likely behind the "iPad mini" name.

The aforementioned are the two clear favorites, in my opinion, but it’s certainly an open field in terms of what Apple may deem a suitable name. We all thought March’s release of the third-gen iPad would follow the suit of the first two, but the Cupertino company surprised everybody, just as it did with the naming (and design) of the iPhone 4S back in October of last year.

It could be called the "iPad S" as an altered iteration of the third-gen iPad, although whenever Apple has gone with the "S" moniker, a number has always preceded it. The iPhone 3GS and iPhone 4S are examples of a progression on main versions rather than completely new devices, and if Apple were to go with "S" as opposed to "mini" or "nano", it would contradict the theory behind the previous S series devices. Still, I think you’ll agree, it’s plausible, and does have a favorable ring to it.

As a rank outsider, Apple could go the other way and rock with the iPod touch Maxi/Large/XL or something similar. As far-fetched as it sounds, "mini" and "nano" make the device sound small, but if the purported 7.85-inch display size rings true, the device will be far from small, and less than two inches shorter in diameter than the all-singing iPad proper.

There’s nothing to suggest Apple won’t follow the precedent set by its notebook range in simply referencing the next device by generation. For example, the first and third-gen MacBook Pro are both referred to identically, but differentiated by generation numbers, so it’s possible the smaller iPad could simply arrive as the fourth-generation iPad.

Following on from the above point about Apple’s current trends with other devices, the company also labels hardware based on size, with the 11-inch and 13-inch MacBook Airs, for example, each having their own unique identity. Thus, it stands to reason Apple could follow suit with the scaled-down iPad. Granted, "the 7.85-inch" iPad is a bit much from a marketing point of view, but it would be in-keeping with what Apple has done with the rest of the range.

What do you think? mini? nano? iPad S? Or do you think Apple has another name up its sleeve?