Another day, another jailbreak tweak that promises to leverage iOS 5’s Notification Center to make our lives easier – this time we have WeeTranslate. 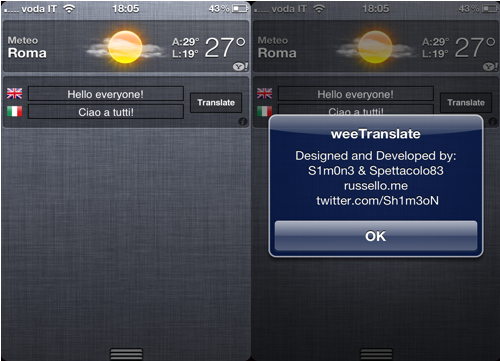 What WeeTranslate does is to add a new widget to the iOS 5 Notification Center that allows the input of text which is then translated into the language of your choice using Google’s powerful Translate service.

While it’s admittedly not going to win any Apple Design Awards, as the video below shows. WeeTranslate does indeed work and if you’re the kind of person that finds themselves translating a few words of text on a regular basis then it could well be worthwhile installing.

Apple added Notification Center to its iOS 5 beta in an attempt to bring the iPhone, iPad and iPod touch into the 21st century with regard to its antiquated notification management system. What they also did at the same time was to being widgets to iOS via the same drop-down drawer as notifications.

Ever since the first beta arrived two weeks ago talented jailbreak developers have been hacking away to make their own widgets to sit alongside Apple’s two default efforts – Stocks and Weather.

We’ve already seen widgets for all kinds of things ranging from a new task manager to monitoring Facebook and Twitter and we don’t see the onslaught of new widgets coming to an end any time soon.

Of course to install this widget, your iPhone must be running iOS 5 Beta, jailbroken. If you’re already running iOS 5, you can apply a tethered jailbreak using Redsn0w for Windows or Mac, or by using Sn0wbreeze.