The iPhone 5, which you couldn’t possibly have missed coverage of since it’s been discussed and nauseam by geeks and non-techies alike, is actually Apple’s sixth-generation smartphone, despite being handed the "5" moniker. In 2007, Apple introduced the original iPhone, then the iPhone 3G arrived, and a while later, Apple introduced the 3GS – a much faster, slicker experience than both of its predecessors. The iPhone 4 brought a radical new design and Retina display to a table now crowded by ravenous iFans, and the iPhone 4S cuts a more vivid picture, having been introduced only eleven months ago.

The iPhone 5 was released on Friday, and although we’ve seen it compared with the other flagship devices of today – notably the Samsung Galaxy S III – we haven’t seen anything quite like what has been thrown on YouTube today. In the clip, each generation of iPhone is compared, and as well being interesting in that it allows us to see each generation side-by-side, it also threw up one or two surprising results when a couple of basic tests were run. 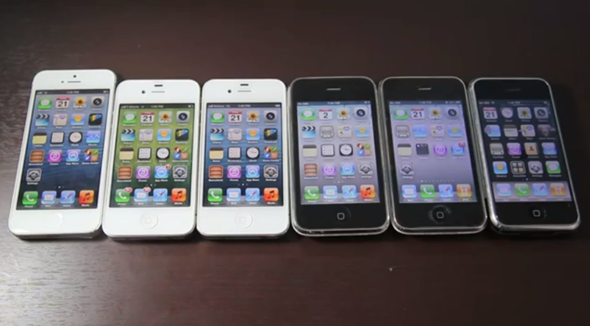 Drafting in the help of further hands, each of the six devices are turned off at exactly the same time, and notably, both the iPhone 4S and iPhone 5 took the longest to eventually power down. Although we’d perhaps expect the dual-core devices to carry everything out faster, it’s worth noting that both pack considerably more features than the older devices – even those running iOS 6 – so the delay is somewhat explainable.

In terms of booting up, the new iPhone 5 trailed its predecessor – the iPhone 4S – and although the difference was marginal, it is a little surprising given the rave reviews and general consensus regarding the A6-powered smartphone.

Although the older iPhones managed to shut down quicker than their younger cousins, loading web pages was a different story entirely. The iPhone 5’s blistering pace certainly told, and although the test is not conclusive enough to make any real assessments, it certainly provides a little food for thought.

If the clip has left you in any doubt about the iPhone 5’s speed, I can assure you, it’s considerably faster than the iPhone 4S, which itself is certainly no pushover. If you’re in the market for a smartphone with that little bit of bite, Apple’s latest is definitely among the greatest.