Yesterday, it was confirmed through multiple benchmarks that, with its custom ARMv7 dual-core chip dynamically clocked between 750MHz to 1.2GHz, Apple’s iPhone 5 is indeed the fastest smartphone available in the market today. It bests every other high-end Android smartphone (Galaxy S III, One X, Galaxy Nexus, you name it!); doesn’t matter if they come with four cores or are clocked at higher frequencies.

Now, we’ve come across a video that puts the iPhone 5 against the Galaxy S III using quite a few of the same benchmarks. Check it out after the jump. 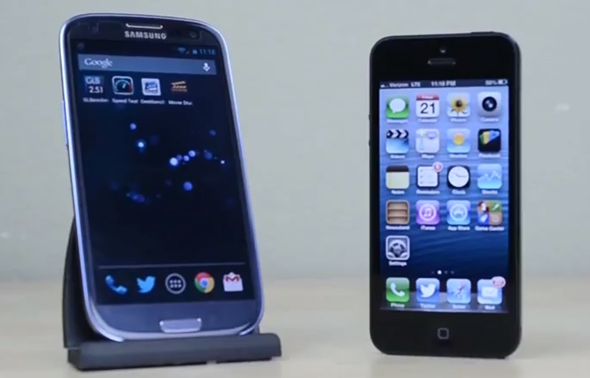 Performance over LTE under SpeedTest.net, under SunSpider Javascript 0.9.1, GLBenchmark 2.5, all are compared and shown the video. The results are still the same, of course: the iPhone 5 smokes the Galaxy S III.

The most significant performance differences can be appreciated under GLBenchmark Egypt HD test in which iPhone 5 renders on-screen and off-screen graphics nearly twice as fast as the Galaxy S III. Browser performance also sees similar results, with the iPhone 5 scoring half as low as the Galaxy S III (lower is better in SunSpider).

All of this comes as a result of the tight integration between hardware and software; Apple develops iOS and designs the iPhone around it (and vice versa). Both are, quite literally, made for each other. Android phones, on the other hand, have their hardware and software created by different companies so they compensate for the lack of optimization by throwing in more cores and higher clock speeds.

This tight integration also has other benefits as well such as significantly improved power management. The iPhone 5 – despite having a 1440mAh battery – can last on 4G LTE for almost as long as a DROID RAZR MAXX with its 3300mAh battery.

But keep this in mind, though: these are just benchmarks. Real-life performance of the Galaxy S III vs. the iPhone 5 – taking photographs, browsing the web, sending and receiving texts and calls – isn’t noticeably different. Benchmarks like these are meant only to test just how technically faster – in terms of calculations per second, and frame-rate for graphically intense games – one phone is over the other.